Damn the dam, enjoyed the falls

After enjoying my last weekend trip to Hogenakkal, it was time for another trip. This time, 6 of us from office - Kalyan, Venkateshwar, Nagasrinivas, A Srinivas, Ankur and I decided to go to Nagarjunasagar for the weekend. In the end it trned out to be a Sunday-Monday trip because of various reasons which I will not go into here. 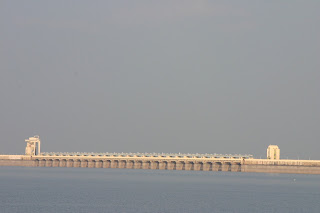 A view of the dam
We set out in 2 cars at around 7:30 in the morning on Sunday. After a horrible breakfast at Ibrahimpatnam, we reached Vijay Vihar, an APTDC hotel at Nagarjunasagar at around 10:30. We checked into our rooms and headed out towards the Launch Station to take a boat to an island called Nagarjunakonda that housed a museum. We bought tickets for the 12:30 boat.

We had lunch (a simple South Indian buffet) at a hotel nearby. A Srinivas was very keen on not missing the boat (because he could not get tickets for this boat the last 3 times he had come to N'sagar). He told us it was at 12:20 to make sure we did not miss it! I'm sure he's going to become a very good Software Project Manager one day!

We got on to the boat, reached, saw the museum and got back in the same boat. Now I'm not elaborating this part because I really wish we had missed the boat. The whole thing was that boring!

We returned to our hotel and had a refreshing swim in the hotel pool. We then had dinner and went to sleep. 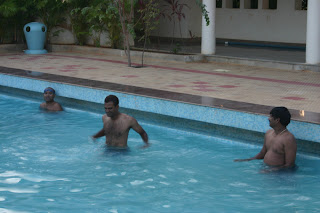 In the Vijay Vihar pool
The next morning we woke up late, had breakfast at the hotel (good Idlis, Wadas and Tomato Bhaath), got ready and started for Ettipotala Waterfalls. We got there in about half an hour.

There is a park that has a point where you can see the falls. There is another path using which you get to the base of the falls. We took a few customary photos from the view point. 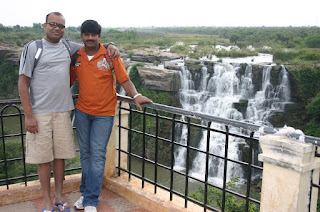 At the 'View Point'
There is a restaurant where they make food only to order. We ordered our lunch there and said we would go to the base of the falls and return and have lunch.

We started off on the path to the base of the falls. It was an arduous trek. A long flight of steps (which Venkateshwar insisted, was hundreds of years old) and some rocky terrain later we reached within striking distance of the water. 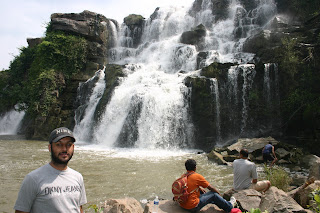 Within striking distance of the water
Some of use debated whether we should actually go under the water or not. The path was strewn with rocks which were very slippery because of the moss that had collected on them.

I badly wanted to go but was scared that I would slip. A Srinivas then deftly made his way right to the base of the falls. Ankur went next. I decided to go too. Slowly, watching every step, I made it to the spot too. Venkateshwar could not resist and he made it too! 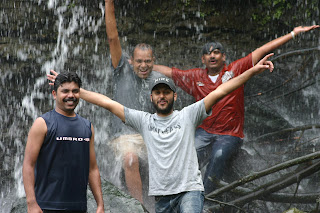 At the base of the falls
The whole feeling of being under cool, natural water falling on you is unbeatable. And though the water looks mild from far, when you actually stand under it, it can hit you quite hard. The four of us had a whale of a time under the falls.

This was even better than the Hogenakkal falls because in Hogenakkal, they had constructed a concrete platform under the falls for people to experience the falls. But here, it was pristine, pure nature. The water falling from up, you on the rocks, trees all around.

And I have to thank A Srinivas for this because if he had not made the first move to go under the water, I guess none of us would have gone.

After about half an hour under the water, we got back and slowly made our way back to the point from where we started. A hot lunch awaited us. Nothing grand. Just simple and tasty.

Once we finished our lunch, we headed back towards Hyderabad.

Overall it was a good trip. A tad tiring in the end but fun nevertheless.
at November 21, 2007