on December 27, 2007
We woke in the morning at around 7. We stepped out of our rooms and were chatting about nothing in particular. We then decided to have a quick breakfast and get ready, sit on the beach for some time and then head out. 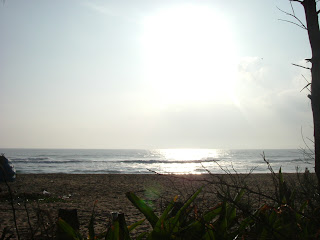 Unknown to us, the tsunami had struck Indonesia by then and wrecked havoc in many areas. Thousands had already died and many times that number were homeless.

We obviously did not realize that the mother of destruction was heading our way. Blissfully we went about our morning ablutions excited about the day ahead.

I ordered an Idli for myself, finished my Peritoneal Dialysis exchange and was watching TV. MVK came down and was fiddling with the camera. After a while, he went to his room to get ready. Pushkar went to take a shower.

Suddenly, water came into the room from under the door. I did not know what to make of it. I just shouted out to Pushkar. The first gush was barely a centimeter deep. The water went back as fast as it came in, only to be followed by repeated gushes, each bigger then the earlier one.

By then Pushkar came out, wrapped in a towel and we were both wondering what the heck was happening.

Thoughts crossed my confused mind trying to make sense of the situation. I had heard the previous day that this was a full moon day and was wondering if the tide was a little stronger than usual due to which the water had come this far. I was puzzled why no one at the resort had warned us about this. I thought this might be a regular occurrence and the resort management did something stupid by not telling us.

Pushkar made his way towards the door. By then we were both neck deep in water. The room door was closed. The pattern of the water continued. Huge gushes of water inward and then a surge outward. The pressure of the water was intense.

We still had no idea of what was happening.

Pushkar forced the door open and was petrified with what he saw. As he would describe it to me later, he saw a huge wall of water coming towards us.

He slowly made his way out of the room. There was a window next to the door that had a concrete cover. He shouted out to me to get the hell out of there. I slowly walked towards the door. It was quite difficult. The inward gush of water forced me backwards. The outward gush took me towards the door but shut the door too. I glanced to my side and noticed the television set, refrigerator and cots bobbing up and down in the water.

Was this it, I wondered. The last way I wanted to die was by drowning. Random thoughts crossed my mind. The risk of infection of my exit site (the point in my stomach that had the dialysis tube going in), the dirty water I had ingested, everything was scary.

The next time the water came in, the door opened and before it could close with the outward gush, I put my left leg in between to prevent the door from closing. I then forced myself through the doorway and managed to get out of the room. Pavan and Pushkar helped me and pulled me out. Slowly we made our way to a higher piece of land and caught our breath. In the next few minutes Krishna and Venkateshwar also came there.

I learnt later that Venkateshwar was outside the room when the water came towards us for the first time and instinctively darted away from the water. The surprising thing is he did not even get wet!

Pavan and Krishna had had a harrowing time too.