Time of my life

I got back from Goa yesterday. I had the time of my life. It would not be an exaggeration to say I've never enjoyed myself so much.

We got to the place we had booked called Riverside by about 4 in the evening on Friday, the 29th. The place was horrible. The river by the side of which it was located was more like a 'nala'. My brother and I started calling it Nalaside!

It was a one building hotel, no greenery and had no room service.

We immediately decided to change the hotel. We kept our luggage there and got into the taxi and went to this place called La Calypso. I had found it on the internet when I was in Hyderabad. It was a 2 minute drive from where we were.

This place was much better. The resort was spread over a huge area and had a lot of greenery. A few steps from our room was the swimming pool and a few steps from the pool was the beach. It was almost like the hotel had its own private beach. 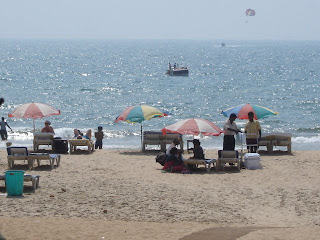 We moved our luggage to this place and then went over to the beach. Getting my feet wet in the water was exhilarating. I sat in the water for a while feeling the waves on my back. It got dark soon and we had a few snacks and drinks and then headed back to our room.

After a quick shower we went over to the restaurent and had dinner.

The next morning we got up, had breakfast and headed over to the beach. We swam for a while and then took a motor boat to go dolphin spotting. Well, we did spot dolphins but it was a blink-and-you-miss affair.

Then we tried the water scooters. This was real fun. To drive these beasts in the choppy waters of the ocean can be quite thrilling. For a few seconds I was even airborne. 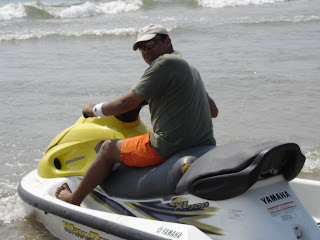 After some aimless swimming and lying on the beach, I went to the swimming pool. There were 3 showers by the side of the pool. The middle one was too good. Now, you might wonder what can be too good about a shower? Well, I like my showers to have a lot of force and this one was really forceful and the water was nice and cold.

After a long time under the shower, I jumped into the pool and swam and generally played around in the water. 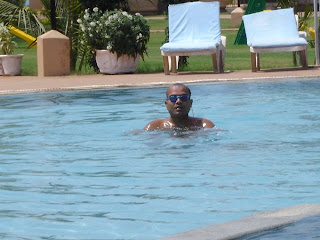 That evening I was scheduled to go for a dialysis treatment. So, around 4:30, we left for Vrundavan Hospital. The techs there were surprised that I could cannnulate myself! And unfortunately, I did not take pictures of the unit (I saw your comment after I got back home Bill!)

After the session, we went to the Ingo's Saturday night market where there were about 95% foreigners selling different things from clothes to jewelery to food.

The next day was pretty much the same as the first - beach followed by swimming. But that day we did some parasailing which was not as scary as it looks. 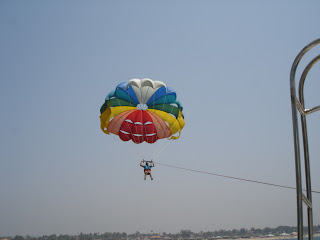 And we did something really enjoyable called the Banana Tip. Basically, they make you sit on a long tube which is tied to a motor bot. They take the tube into the ocean and then suddenly make the tube tip and you go into the water. It was real fun! 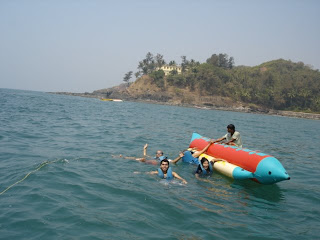 That night we went to a casino which is located in a small ship on the River Mandovi. The casino is really good with slot machines and tables for Black Jack and Roulette. They also had some Russian dancers and complimentary drinks and dinner.

The next day was pretty much the same - lazing on the beach and swimming pool and doing some water scooter rides.

I kept trying to find out and fix some snorkelling through the trip but nothing materialized. That evening the driver of our taxi took us to a place called Goa Dive Center and they arranged a snorkelling trip for us on the last day of our trip.

So, on the last day, we left in a speed boat at 7 in the morning for an island called Grand Island. It took us about an hour to get there. And there we snorkelled. They give you these huge goggles and a tube with which you can breathe and then you can swim around and see life inside the water. It was truly amazing to see shoals of fish of exactly the same color, size and patterns swimming together. 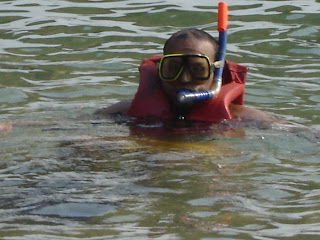 That afternoon we headed back to Hyderabad.

All in all, the trip was great. I got a much needed break and had a lot of fun. Goa is really a nice place to de-stress. The trip was very relaxing and rejuvenating.
at March 05, 2008

Kamal that sounds like a wonderful trip. I am so happy that it was so great. From your report it sounds as if there was no time to feel under dialyzed.

WOW!!!
You had a great trip Kamal.
Seemed like you have covered everything in Goa.

1. When you go Goa , dont forget to wear gogol : ) , push your self into ocean, take a snapshot.
Hey that snap is really wonderful, u look great.
2. I am planning to go to Goa.
3. Need to take tips from U.
Helpful report.