on July 20, 2008
(Disclaimer: I do not have anything to do with Pragathi Resorts and this article is not intended to publicize the place. It is merely an account of a fun-filled day we had there.)

Finally, we made it to Pragathi!

This time, on Saturday, I quickly called a few folks and checked if we could go on Sunday. Wonder of wonders, many people agreed. A few did not due to other engagements. But we were 6, so we thought that's good enough to go.

Sunday morning came. And before you could spell V-A-C-A-T-I-O-N, we were on our way to Poorna Tiffins for a sumptuous breakfast of hot idlis soaked in ghee. From there we headed out, in two cars for Pragathi Resorts. Amrik, Murli and me in one car and Kartik, LN and Thrinath in the other.

The journey lasted a little more than an hour. My jaws and mouth were aching by the time we got there because of laughing too much. Amrik carries this virus with him which can really cause these symptoms. So, beware!

We bought the entry tickets and went in.

Pragathi Resorts is a vast expanse of greenery. The place is full of lush green foliage, small ponds, fountains and some beautiful animals. The best part of the resort is the huge swimming pool which has slides, fountains and a 'bucket blast' which periodically throws a huge amount of water from the top at great pressure! There is a DJ who plays great loud music for a few hours on weekends by the pool. 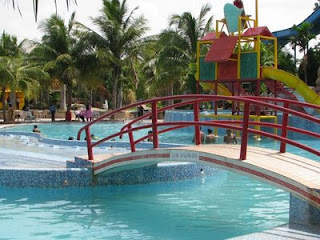 A view of the pool
We ambled around for some time and then settled down in chairs next to the pool and chatted for a while.

Around 10:30, we decided it was high time we got into the pool. We quickly changed and dove in. Thrinath and I were the only ones who knew how to swim. Amrik pretended he could swim with not much success. He had these new swimming goggles from the US and in the end it only protected him from the sun!

Kartik, on the other hand, acknowledged that he could not swim but was really aiming to master the fine art by the time we got out of the pool. Again, not much success!

We started off by playing this game where everyone picks a guy at random. And then hits him with a ball! After we tired of this, we did the slides, a 'bucket blast' thrown in every now and then for good measure. We then played Volleyball for some time.

By this time, the DJ had started the music. The atmosphere was electric. 50 odd people in the swimming pool and under the fountains dancing to the latest chart busters. And mind you, the quality of dancing was uninspiring to say the least. It was just people having fun.

After about four hours in the swimming pool, we got hungry and came out of the pool, changed and went to the restaurant where lunch was arranged. The quality of the food left much to be desired. The spread was good but the food was not tasty.

We had a few drinks and then decided to leave.

I was quite dehydrated for some reason. I had probably lost a lot of water during the hours in the pool directly under the sun. While waiting for our cars at the reception area, I actually fainted. My friends lifted me up and we then got into our cars and headed out.

All in all, apart from the hiccups in the end, it was really a fun day.
vacation