In search of the perfect Pongal

on September 25, 2008
Pongal is probably the only dish in the world that shares its name with a festival. Pongal is basically made with rice, moong dal, cashew and seasonings.

There are quite a few variants of pongal. Rava pongal (powdered wheat instead of the rice) and shakkara pongal (the sweet pongal) are the most common. On the festival day, many of these variants are made together to make a sumptuous meal.

Traditionally, the pongal is made by putting all the ingredients into an earthen pot and cooked by wood fire. Purists insist that the true flavors of the pongal are only possible with this method. The LPG flame can never have the same effect. And making pongal in a microwave is pure blasphemy!

One important seasoning in the pongal is the black pepper. Well, you don't usually bite into the pepper and most people painstakingly remove the peppers before eating the pongal. But it undoubtedly provides that irresistable flavor. 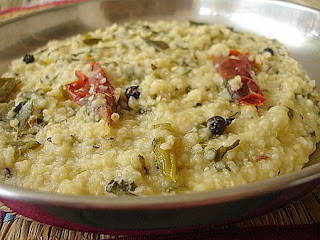 Ghee is probably the most important ingredient in a good pongal, calories be damned. A pongal simply isn't a pongal without a generous dollop of ghee while cooking!

There are many places you get pongal. Murugan Idli Shop in Chennai makes very good pongal. Mumbai's Madras Cafe in Matunga makes excellent pongal too.

The best pongal I have ever had is in the old Taj Mahal Hotel in S. D. Road in Secunderabad. It is a Rava Pongal. They make it only on Sundays and on Pongal day. Many a Sunday have been started in our family with breakfast at the Taj, the Rava Pongal being an integral part of it. It has just the right flavor, the right amount of black pepper, just enough ghee and they serve it piping hot!

Why they make it only on Sundays remains a mystery.
food

Usha balu said…
Kamal
You forgot to mention some more key ingredients that will enhance the flavour and taste of pongal..they are :
Crushed ginger,whole jeera ,Curry leaves
And a pinch of asafoetida.
So why not for a change ( from your ultimate food ��) make pongal and gothsu.������
Usha Balu.
September 20, 2020 at 6:16 PM

Usha balu said…
Kamal
You forgot to mention some more ingredients that would enhance the taste and flavour of pongal .They are :
crushed ginger,cumin seeds ,a pinch of asafoetida and curry leaves .So why not try Pongal for a change from your usual ultimate food..😁😂😋😛