About a year back I had written about a trip to Nagarjunasagar Dam and the Ethipothala waterfalls.

This Thursday being a holiday on account of Gandhi Jayanthi, a few friends and I decided to go there again. It was a trip planned at short notice. Funny that trips planned too much in advance never work out while trips planned with really short notice usually happen successfully.

So, there we were on Thursday morning - LN, Thrinath, Sunil, Sriram, Veera, Ramana, Subhash, Jiten and I in a Qualis making our way to the Ethipothala falls. Last time we had learnt our lesson and so this time we decided to avoid the Nagarjunakonda island and the (oh my gawd) boat ride which is 'being taken for a ride' in the truest sense.

We stuck to the basics. Go to the waterfall, have lunch and get to the base and well, enjoy!

We got there around eleven instead of the planned nine o' clock thanks to one of our nonchallant group members (please don't get me started on this one). It was quite a hot day. We ordered ourselves some lunch which was being custom made so would take some time. In the meantime we took some pictures from the vantage point at the top. 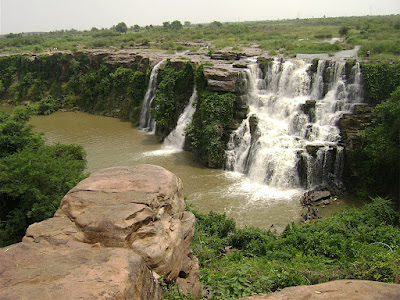 View from the top
Lunch was pretty basic stuff - phulkas, dal and fried rice. The dal was quite tasty though and not surprisingly got over and they refused to give us more. The problem is they make food only to order. So, if you're going there and plan to have lunch, order extra in advance!

The way Ethipothala is structured - there is an enclosure that takes you to the vantage point and this enclosure also has the restaurant and an unimpressive lawn and outside this enclosure before the ticket counter, to the left, is a rustic path that takes you to the base of the falls. Many people don't even know where this goes. They come here, take pictures from up and then leave without even getting wet. What a criminal waste of time!

We headed towards the base of the falls. There are some very basic steps upto a point and then you have to make your way to the falls through rocks, shrubs and trees. The trek is arduous but well worth the effort. 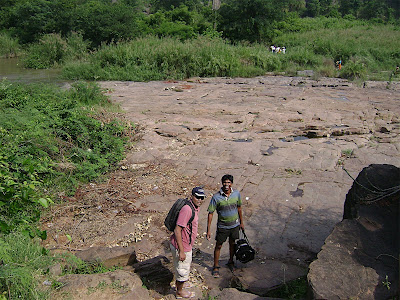 Jiten and me on the way to the base
Once we got within striking distance of the base of the falls, we stripped to our swimming trunks, put our belongings on a rock and plunged into the water and carefully reached the rocks where the full force of the River Krishna could be felt on our heads. 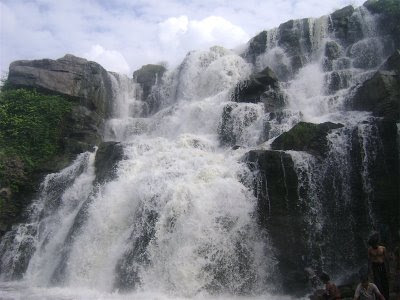 The base of the falls
The feeling was absolutely exhilirating!

We had to be very careful as the rocks were very slippery due to a thin layer of moss. They were not rolling stones after all and they did gather moss!

The rest of the group joined us below the water and we had fun for a long time trying out different areas under the water, shouting and posing for pictures. 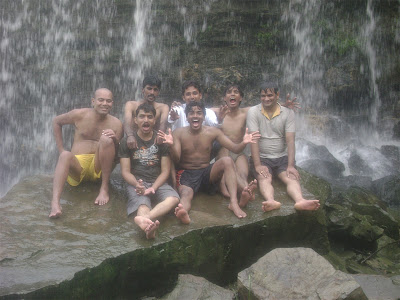 Under the water
We tried a lot of things we hadn't done last time. We swam quite a lot in the water near the falls. Last time we were a little nervous because we had heard stories of crocodiles frequenting the place. Also, there was no one apart from our group at the base of the falls last time. This time we were much more at ease because there were other people who had also come to the base.

The time we spent under the falls really washed away all the exhaustion of the hours before in the hot sun.

After a couple of hours there we trudged back up and started back for home. We made a quick trip to the dam just to see if the crest gates were open. They weren't. We then headed back for home. I reached home at 9 in the night.

Ethipothala is a classic case of "Jisko dhoondhte the gali gali, woh ghar ke pichhwade mili" which translates to "What I was searching for in the lanes and bylanes of the city, I found in the backyard of my house"!

I was yearning to visit a good waterfall for years and did not even imagine I would find one roughly two hours from my house. It looks like a visit to these falls is becoming an annual ritual!

What I like most about Ethipothala is the natural surroundings. The whole approach to the falls and the falls themselves are barely touched by development. The electrical connections for the 'sound and light show' they have these days (why on earth?) are almost concealed.

For those in Hyderabad that haven't been there, take my advice and go there. You will love it.
at October 05, 2008