Defacing the city prior to political rallies

on March 01, 2009
Apart from the chaos on the roads and the extreme inconvenience that is caused to common people like you and me, political parties have this disgusting habit of defacing the entire city prior to a rally. Sample these walls in my area: 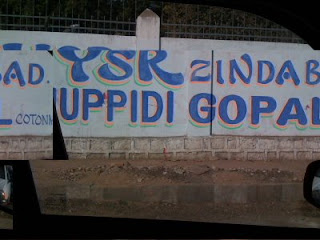 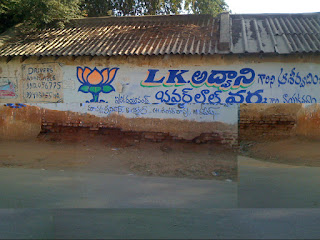 These walls will stay like this for months. Nobody will clear them. This morning as I drove down to Poorna Tiffins for my weekly rendezvous with Idlis I was dismayed at the amount of disfiguration the city had gone through due to one rally. Ugly posters all over. Party flags strewn all over the roads.

I read in the newspaper yesterday about a question put to the Civic Administration, the GHMC about this very issue. The Commisioner replied that they would investigate who was responsible for this and would take action against the individuals.

Who is responsible for this? Isn't it obvious? Does one need an investigation to figure out who disfigured the city during a Congress rally? And they will take action against the people who were responsible? Is the commisioner going to pull up the Chief Minister for this?

Again, don't take this as Congress bashing. The rest of the parties are equally guilty. The TDP, the BJP, every single party.

The political class of this country has a lot of answering to do. The trouble is, who is going to ask the questions?
politics

Dinesh Aditya said…
The writings and graffiti on the walls of the city is the only visual form of public urban art we have. But I have an issue with all the repetitive posters and flags. I remember a hideous tiger (political symbol, presumably) painted on the wall of Imax to mint road, but the point is that I started to identify that with the area more than the multiplex!

PDS said…
No one will take any action even if questions are raised. Like the commissioner, authorities will give the same old 'will investigate' answer and that would be the end of the episode.

Unknown said…
In Madras, the political parties who do stuff like that on the wall pay for the clean up, which is done by the Corporation. They also pay a fine for defacing walls, which makes it much less than in Hyd.. They make much better use of the media in TN so the need to use wall space is much less. Sun TV, Jaya TV, Kalaignar TV have better programming and TRPs compared to the rival channels.

The menace of hoardings has been curbed in Madras. Overhead electrical and telephone lines are history. The cable TV lines are also slowly making their way underground (by law), and with DTH too, the sky line too will look much better.

Just stand at Ameerpet, and tell me which is a bigger eye-sore? The horrid political posters or the bunches of ugly wires hanging all over the sky?

You need to have more activism in Hyderabad. No one is going to do it for you. Use Facebook, etc to band together, use local media to draw attention, and shame the local administration into action.
March 2, 2009 at 8:26 PM

IGA Nephropathy said…
Thinking of politcal parties, how is Loksatta doing these days? I have known JP from his IAS days and he is an amazing person.
March 2, 2009 at 11:14 PM

Kamal D Shah said…
I have always wondered on how to reply to comments on the blog! Whether to put them there for continuity or to respond to the person by email?

I've been doing both these days!

I don't hear much about Lok Satta these days. I saw one hoarding in Telugu (which I cannot read) at the Punjagutta circle with JP featured and one cut out of JP at Begumpet. Nothing in the news or newspapers.

IGA Nephropathy said…
JP kept saying about how the worry about doing well in elections becomes a self fulfilling prophecy....
March 4, 2009 at 3:20 AM

Kartik said…
Starting this week, the election code of conduct has been enforced. Defacing public property has always been against the law. But from here on EC will look into any such issues. You can use 1100 (EC call center) to complain about any such issues, or any other breach in code of conduct by any political party. There is also a civilian body looking into effective enforcement of code of conduct for political parties. Hope things will be a bit better this time!
Btw, if you need info on Lok Satta they have a very good website showcasing their current activities at http://loksatta.org !
Anyways, my suggestion is very simple - don't just vote for a party, vote for the person you want as your representative - that's the way our democracy works, you don't vote for a CM/PM :)
March 4, 2009 at 1:42 PM