In search of the perfect Ugadi pachadi

Inspite of staying in Hyderabad all my life, I was introduced to the Ugadi pachadi only about a year back. Now I am a big fan!

The significance of Ugadi pachadi is that it has six different flavors - shadruchulu - reflecting the different flavors of life itself - sweet, sour, bitter, astringent, salty and spicy. The Ugadi pachadi has an ingredient that adds each of these flavors - jaggery, raw mango, neem flowers, tamarind, salt and red chilli powder. Coconut and bananas are often added as garnishing. 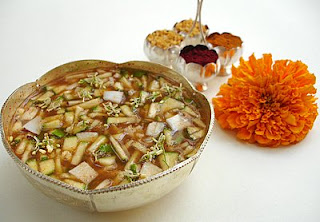 The method of making the pachadi along with the additional ingredients depend on the part of Andhra Pradesh you are from. People from Telangana, I am told, make the pachadi more watery - almost like a juice. People from Rayalaseema and Coastal Andhra make it more like a paste. For the record, I like the watery version (I'm on dialysis, remember?!).

The beauty of the pachadi comes from the different tastes. The combination of all the six flavors is what is unique about it. A tinge of bitter, a tinge of spice may cause a few raised eyebrows but it is to be experienced to be believed!

I have had the pachadi prepared by many different people inspite of having it only on two Ugadis. It is rarely available in shops. Some restaurants do make it on Ugadi day. The best is definitely one made at a Telugu household using a recipe that has been handed down from generations. The key is in the proportion of the ingredients.

Ugadi and its pachadi mark the arrival of summer when the Indian markets are flooded with raw mangoes. Ugadi is the Telugu new year day. The same day also happens to be the Kannadiga and the Maharashtrian new year day too - although with different names.

Traditionally, astrologers predict what's in store for all of us on this day. Usually a mix of bitter and sweet - just like the flavors of the Ugadi pachadi!
at March 29, 2009

Good to see that you liked ugadi pachadi. We also prepare something called bobbattu. Did you have chance to have that.

No Nagaraj, I did not have the bobbatlu this time but I have had it before and it is really good!