The deed is done!

Judging by the long line at the polling booth, it looks like the voter turnout is going to be higher than usual. I have never seen such a long line at my polling booth in previous elections. Usually, I would go, there would hardly be a couple of people, I would walk straight in, vote and leave.

This time, however, there was quite a long queue and it was a really hot day. 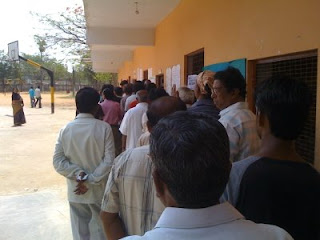 I took a look at the list of the candidates put up outside the booth. 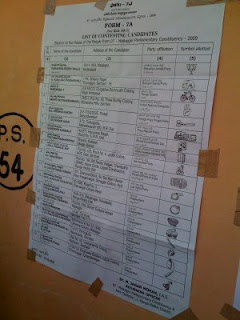 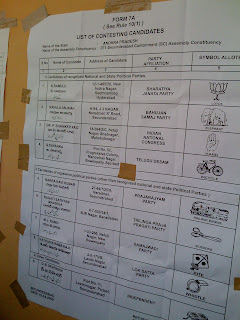 Confirmed that the folks I had decided to vote for were there. Went inside and cast my vote!

Special thanks to Kartik Reddy Thum for helping me find the polling booth address. Of course, he was not too happy helping me because he is a staunch Congress supporter and I was voting for the BJP at the center!

Yesterday, I changed my Facebook status to "Vote BJP". I was really shocked with the response I received. People tore me apart and wondered how I could side with murderers. Well, I was not aware that the BJP evoked such strong reactions. Anyway, this is a democracy and I have the right to vote for whoever I wish! And I really do not agree with the thinking of the anti-BJP brigade. Granted, they have their flaws. Who doesn't?
at April 16, 2009

Voting for the BJP in the LokSabha polls has some logic, since there is a chance they can either form a govt or influence who forms one.

At the state level they are a NOBODY. Waste of a vote. Thought that you were voting Congress (YSR) for the Arogyasri plan at the State level.

Yes, that's what I did, BJP at the center and Congress in the state.

A very valid choice for the center. Though I did differ with you for the state's choice by voting for the "mahakutami" candidate from my constituency. This was the first time, I was voting for a combine and not a specific party or candidate.

With what ever has been happening in the center and the way there have been serious compromises in the way the central leadership handled many of the internal and foreign affairs, hence a vote for the Congress is an utter denial for progress.

1. The center spends crores of dollars in building road links in Taliban infested Afghanistan, whereas my city's local roads are in apathy.
2. It has allowed a former ally and close neighbour in Nepal to be infested and ruled by Maoists, with complete control by China
3. Complete failure of the public distribution system in spite of a much above average monsoon and harvest.
4. Absolute apathy in handling the security council issue of publicly humiliating an Indian national for election to the UN Secretary General post.
5. Poor handling of internal security
6. Absolute mishandling of the government machinery in handling many important posts
7. Non progressive non-minority uplifting policies, just namesake minority appeasement
8. Complete breakdown of the political will in managing its own political allies. Almost all of them have broken off the so called UPA combine
9. Mishandling of the Singur situation

Besides this, there are many other issues which a party like Congress, which has ruled over India for over 80% of the time since independence can afford to do.

Hence the choice for a change that "may" provide the leadership that is required to lead a country like India the next 5 years.

I agree with a lot of what you've said. But my vote was more for Aarogyasri, the brilliant medical insurance plan that the Y S Rajasekhar Reddy government has started.

I have a written a lot on this in earlier posts. This scheme has really benefited a lot of people.

Medicine is at a stage where many people continue to die due to unknown problems in spite of having a lot of money.

When that is the shape of things, having to die of a condition for which there is a well-known treatment just because someone does not have the money is really, really sad.

I have myself seen some people who had renal failure and died simply because they just could not afford dialysis.

Aarogyasri provides any poor person dialysis twice a week at any hospital (including the corporate hospitals that have better facilities than government hospitals). This is the difference between life and death for such individuals.

And what did it take?

Some creative thinking and support from the government.

My vote is solely for this scheme which a certain Mr. Naidu has threatened to replace with another scheme. Why? Why not continue with this scheme and tweak it to remove the defects? This kind of replacement of this scheme is going to cause untold hardship to a large number of people.

My vote is for Aarogyasri and nothing else. You might accuse me of being narrow minded and worrying only about one aspect of governance.

So be it. This is dear to my heart!

I know this is a way too late to comment on this, but I am catching up with your blog now I want to offer my 2 cents:

This idea of 'Wasting your vote' - follow the majority to give value to your vote is scary to me. How can a vote be waste? Each vote is of same value - that's democracy. The outcome of it may be the party or idea you agree with doesn't come to power. But that's again is democracy for you.

Changing who we vote for based on who will have more chance of forming a government is a convoluted thinking. It reminds me of Nietzsche's quote I came across recently

Disclaimer: I didn't vote, I live too far away from a polling booth. But I am just pissed at the logic of selecting a leader.