on July 25, 2009
Thrinath, a former colleague and a dear friend challenged me to a competition a few days back."Who can eat more idlis?" Wow, I thought. Who could eat more idlis than me? This was going to be easy. I agreed. The bet was that the loser would pay the bill. Simple enough. The date and time were fixed. Saturday, 25th July, 8:30 a.m. at Poorna Tiffins (where you get arguably the best idlis in town).
I added a caveat. The idlis had to be with ghee. Thrinath preferred idlis with ghee too.
So, the stage was set. Saturday it was.
To be honest, I was pretty confident of winning. I'm going to let you into a little secret. But promise me you won't tell anyone. I eat a minimum of 16 every Sunday morning when I go to Poorna Tiffins. On occasion I have also touched 24. 20 is the average. Who could eat that many? People who have accompanied me have rarely eaten more than half of what I usually do.
Thrinath also roped in Santosh Ramakrishnan, another former colleague into the bet. It was going to be a threesome. The bet was modified so that the person in 3rd place would pay two-thirds of the bill while the first runner up would pay a third.
I was all charged up. Saturday morning came. When I got up, I actually debated whether I should have my daily cup of Darjeeling Tea. If I did not have it, I could probably eat a couple of Idlis more. But I told you I was quite cocky about this whole thing. There was no way I could lose. I went ahead and had the tea.
I then left for Poorna. Thrinath and a few other former colleagues were already there by then. Santosh arrived a while later. We started the competition.
Each of us took 8 idlis to start with. They were heavenly as usual. Soaked in ghee with the spicy chutney. Thrinath was slow. Santosh and I gobbled them up quickly. The only person I was scared of was Santosh. There was a lot of real estate there that could be put to good use in competitions such as this!
All of us took another eight. Thrinath was still quite slow. Santosh had also slowed down by then. I thought both were struggling. I comfortably finished them. I took another four. I had finished 20 and was totally full. I waited while my other two competitors took another 4 each. I was quite surprised and disappointed too. At the end of this round, all of us would be at 20. A three way tie, I thought?
To my utter shock and horror, Thrinath asked for four more and Santosh asked for two. The waiter, by then had figured out we were in a bet and he put two in my plate too. I struggled to finish them. Thrinath and Santosh slowly finished their four and two respectively. There was no way I could have had any more. I got up and went to wash my hands. Just then I heard Thrinath ask for two more! I could hardly believe my ears! Santosh ordered a Poori bhaji. I almost fainted. It was too much for me to take.
The prime consumer of idlis had just been defeated fair and square. The king tuned out to be a mere pretender to the throne. Thrinath was the new king. Santosh and I split the bill because we came a joint second. The poori bhaji did not entitle him a sole second place. This competition was about idlis after all!
At the end of the day, I was lesser by about Rs. Three hundred and thirty and a lot of ego. 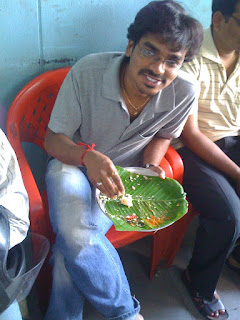 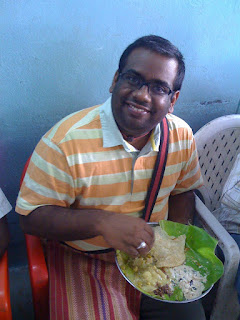 VenkatRamana Lashkar said…
This is an awsome competition...I missed it. Kamal you have time you can strengthen your ability...my mouth was watering when i was reading this....
July 25, 2009 at 7:34 PM