on August 10, 2009
At the pool where I swim, there are diving boards. There is one slide, a spring board and two diving boards. When I was a kid, I used to jump a lot from these boards. For many years however, I haven't. 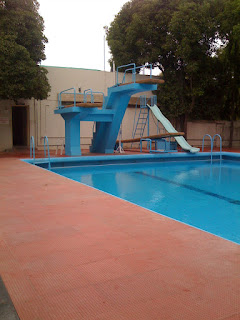 A few weeks back, I had this irresistible urge to jump again. However, I couldn't make myself do it. I needed company. How could I do it alone? It felt a little odd. Men find it difficult to be kids, right?
So, yesterday, I called my brother and asked him to join me because I wanted to jump from the diving boards. My brother came along.
First, both of us did the spring board to get warmed up. This was at a very low height and so was very easy. Then we went up to the diving board which was lower. My brother went first. He was hesitant to start with but then just ran and jumped. I was quite scared to be honest.
When you are standing at the edge of the board, the board, for some reason looks higher than it actually is! I couldn't bring myself to jump off it. I couldn't turn back either. People were watching! Its ok to turn back when you're a kid. Not when you're grown up! I did the next best thing. I sat at the edge like I was very cool. I then jumped. The moment of impact with water from a height was amazing. I touched the ground in a second.
Next was the summit. The equivalent of Mount Everest. The highest board. My brother used the same trick. He ran without thinking or analyzing and jumped right in. Next, it was my turn. God, this was tough. I went ahead. Took a look at the water. It was almost like I was on a plane and had to jump straight out. Was I crazy? Did I want to die so young? I tried the sitting trick. Tried to look cool. A group of onlookers smiled. I couldn't make myself do it. I got up, walked back and went over to the second highest board and jumped.
I was disappointed. I had to conquer the summit. After some banter with my brother, I went up again. I was determined. I was at the highest board again. I had two choices - run and jump or just jump. There was no third option. I just couldn't turn back. Running somehow did not appeal to me. So, I went up to the edge. I thought of the feeling of hitting the water from this height. Would be pure exhilaration. This did the trick. I jumped.
The contact was pure joy!
I had done it! I had scaled the summit!
swimming

Unknown said…
Loved this post (though you must have meant "water" instead of "ground" in "I touched the ground in a second". Else you would not be alive to write this blog!).

Not sure how many of your readers understand what you did. YOU set a goal which no one asked you to, and went about reaching it. Inspite of your fears and lack of training/ability and, dare I say, aptitude.

Most people settle for goals set by parents, teachers, bosses, in-laws, etc.. Whether they reach them or come close to achieving them, they must still feel empty inside.

At the end of the day, or your life, only YOU can judge yourself. You can only if you have Standards that you have set for yourself.

Kamal D Shah said…
It was the ground - the floor of the pool!

preetik said…
Wow, That must have been a liberating experience. I remember the first time i tried my first jump. I felt exactly the same way. But after that there was no looking back.

I am visiting after quite a while.
I really like what you have done with your blog, the new look i mean.

I am real glad the problem you mistook for hemorrhoids got sorted out. I recall how troubling and unsettling it was for you.

From my side, well i got the hospital changed for my husband and here they have the 4008 s machines.
I was wondering if you could just guide me how to set the time and also change it during the coarse of the dialysis. Is there any site where i could possibly download the manual for the machine? I just want to know more abt this machine as the techs are not very accomodating on any info.
He is now getting nocturnal dialysis twice a week.
YOu take care
August 11, 2009 at 12:21 PM

PDS said…
YOU Bugger ! This was supposed to be my blog. Anyways....good I read urs before posting mine. Mine would have been felt like Greek after reading urs.
August 11, 2009 at 5:41 PM

Anonymous said…
Kamal, Prasan...hahaha, I remember the summer holiday afternoons going to swim with you guys.