Lighting up a life - the story of Diane Franks 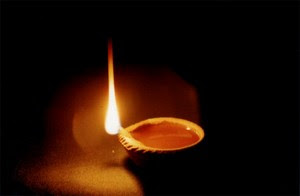 Diwali is the festival of lights. In millions of homes all around the country, people light 'diyas' or lamps to celebrate the festival. The lamp symbolizes light in a dark world. Just like Diane Franks.
Diane Franks is a healthy individual living in the UK. She is currently undergoing an evaluation to determine whether she can donate one of her kidneys to someone who needs it. The amazing thing is she is going to donate the kidney to an unknown person, someone she will never meet, someone she has no relationship with.
Giving a kidney to a loved one in need is the best gift anyone can give. My mother gave me one of her kidneys and I can never thank her enough for that. We see many examples of people donating to their parents, children, siblings, spouses etc. And each one of them is an act of genuine sacrifice. Each of them deserves tremendous appreciation. It is not easy to agree to undergo a major surgery and giving away a part of you even to a person who is so important to you.
Diane Franks takes this to an entirely new level.
She is going to be donating a kidney to someone she doesn't even know!
What do you say about this? Why is she doing this? What prompted her to decide on this?
In Diane's own words, "...I do not like the thought of people struggling, wanting help and not getting it. I know the emotional pain and depression it can bring and believe me, no one should have to go through that. If I can give help to someone, I will – and God willing, I hope that is what I can do in this instance."
Diane will not be meeting the person her kidney goes to. She will not even know how the person is doing. It will be, as she says, an "emotional hole" for a while. I really wonder why this is so. Wouldn't it be great for a donor to be in touch with the recipient and see the difference she has caused in someone's life? Wouldn't it be fulfilling to see the change she has been a part of?
People like Diane Franks reaffirm our faith in humanity. They are like the lamps of Diwali. Bringing light in an otherwise dark world. Read her story here.
at October 17, 2009

Email ThisBlogThis!Share to TwitterShare to FacebookShare to Pinterest
Labels: life

In a way it is better that she does not get to know the recepient. How a transplant does is always a matter of chance. It will only be heartbreaking to know if her donation did not make a difference. Of course, the odds are that it will make a huge difference. But with this approach, she has truly done a noble act and in the spirit of "Githa"...she is not bound by the result.