Trip to Vizag and Araku - 3

We reached the Haritha Valley Resort at around 1:30 in the afternoon after an excellent journey through fog and greenery. We checked into our rooms and had our lunch. We then headed out to Chaparai - slippery stone in Telugu. This was about 14 kilometers from Araku.
A few kilometers on our way, we stopped to take a look at a stream that was flowing below a bridge. A group of village women who were carrying bundles of sticks, probably transporting it somewhere on foot, had stopped on the bridge to take a break. Srinivas asked them how far Chaparai was from there. They said it was very far. We were quite surprised. One of them then said, "If you go by car, it is not very far, but by foot, it is very far!" A very telling comment on the different perspectives different kinds of people have. For us, 14 kilometers was nothing. For these women however, 14 kilometers meant probably many hours of walking.
Chaparai is basically a perennial stream that flows over a sheet of rock. The stream gushes over hard rock and forms a shallow bed where you can walk over to the other side where there is a natural water slide! You have to walk down a flight of steps to get to the bank of the stream. 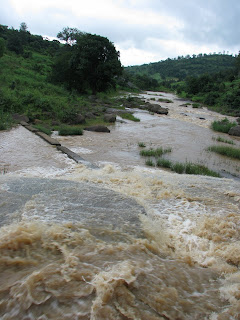 On reaching the place, we quickly changed into our swimming gear and ran down the steps to the bank. Initially we were a little hesitant to get into the water. There was a guide who offered to help us across the stream. Slowly, he held Srinivas' hand. We held each other's hands, formed a chain and trudged through the stream. We had to be careful because we couldn't see the rock below through the water. There were crevices which could hurt us and we had to avoid these by simply guessing their location by looking at the patterns of the flow of the water! The guide, of course, knew where the crevices were and he warned us in advance. 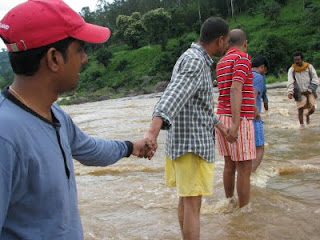 At one point, there is a small bridge, about 2 feet long. This was to help cross a deep gap in the rock. There was this old man standing at the corner of the bridge who told us that we would have to pay Rupees Three per head to cross the bridge. This was a riot! We agreed, of course.
We made our way to the middle of the stream where there is a portion of the rock where there is hardly any water and you could stand there safely for a while. The atmosphere was almost like a festival. There were quite a few people there. Many people had started sliding down the natural water slide on the side of the stream. The water was gushing really hard there and we were a little nervous about trying the slide.
There was also a point in the middle of the slide where people 'bumped' up before continuing. It looked like there was a piece of rock there below the gushing stream. Srinivas and Laxman, brave-hearts that they were decided to give it a shot. One by one they took the slide. They looked like they had fun. They told me that the point where the slide ended had sand below so it did not hurt at all when you landed. 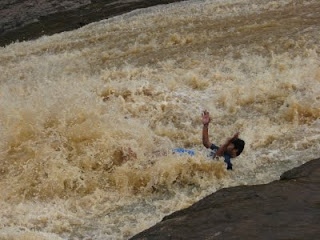 I couldn't resist the temptation. I slowly made my way to the top of the slide. Note that the whole area is covered by the gushing stream and there is hard rock with crevices below which you cannot see. There was this guy at the top of the slide who was playing the good samaritan. He was helping people take a good start with correct positioning of the feet. If you don't position your feet correctly, the water can actually sweep you down the slide. Not life-threatening, but scary nevertheless.
I took position. Looking at the water forcefully make its way down the slide from top was quite unnerving. For a moment, I had second thoughts. I almost turned back. But then the thought of sliding down with the force of the water got to me. I gave in.
Whoooooosh, bump, whoooooosh, whooooooosh, splash!
Within a few seconds I landed into the pool of water above the bed of sand. For a few seconds, I lost control and was being dragged away by the stream. Thankfully, there was rock ahead and I held on to it. But it was great overall. I did sustain a bruise but the exhilaration of going down the water made it worthwhile. No slide in a water park can offer the thrill that this natural slide offered. 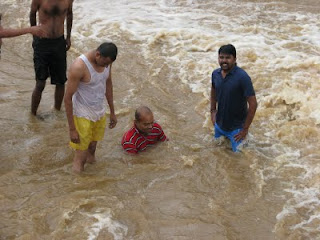 We played around for a while in the stream taking pictures and then walked back to the bank of the stream, more confidently this time. We dried up and changed and then got back to our resort.
We had dinner at another resort.
The next morning, we started back for Vizag. On the way back, the weather was quite different from what we had experienced the earlier day. We were really lucky the previous day.
All in all, we had a great trip, memories of which we will carry for a long, long time to come.
at October 09, 2009

Email ThisBlogThis!Share to TwitterShare to FacebookShare to Pinterest
Labels: holiday

I have been to Araku and I absolutely enjoyed it then!

I didn't go this natural slide though - 'cause my family felt it was dangerous, but after reading your account of it I wish I had gone.

Glad to have you back though! Welcome back! :)

And yes, the slide was super. Wait till you see the video.

Good to hear that u had a great time in vizag and Araku. After all it's the place where Sudheer was born and brought up ;) abviously it should be great ... just kidding :)

you previously informed that u will be going on sep 28th. I was in vizag itself on oct 2nd , 3rd and 4th.

Of course Sudheer, I'm sure there is some truth in that! We postponed our trip because some people did not want to spend Dasara away from home.

I wish I had know that you were there. We could all have met up!

Was looking for some info on Aruku trip..n incidentally slipped in to ur blog


Thanks for the info n u guys seemed to have great fun..the snaps u have posted say themm all.