Does this ad inspire any confidence?

Recently, a new hospital opened in the city. They've probably got a really bad PR agency! Look at this ad that they have in many prominent places in the city. 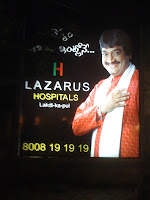 Who is the guy in the ad? Is he a doctor? Why is he wearing a sherwani? I read somewhere that he is a ghazal singer. Hmmm. An unknown ghazal singer on the ad for a hospital! It's not even as if he is handsome or something. Seriously, what were they thinking? This is even more silly than the dick who had his pictures all over the city for a famous club in Begumpet.

They have also flooded radio channels with ads with some guy talking about the hospital. The voice is so sick and he talks like he is being very gentle and caring. This may serve to drive patients away from the hospital rather than to it!

Just a counterpoint to your view:

It takes all types to make this world. An advt that does not appeal to you, may in fact attract some others.

Eg., the Nano is struggling to sell. It's sales have dropped from (numbers are from aging memory cells) 9000 in April to 4000 in Sep to 700 in November. An internal assessment (as reported in magazines) said that apart from the 3 publicised incidents of Nanos catching fire, the target audience (a family of 4 on a motorbike) is not entering Tata showrooms because they are "intimidated". As a result they are planning to come up with some really down-market and crowded showrooms, much like the motor bike showrooms you see in cities.

So a sauve advt for a hospital may attract a "sophisticated" patient. But a "stupid" (from your point of view) advt may attract the person who is currently going to a neighbourhood pvt practitioner or a govt dispensary.

The Country Club seems to have survived a dozen years of advt-ing too.

You may have a further counter-point to this line of thought.

I totally agree that different ads may appeal to different people. My only point was this ad should appeal to no one except to the unknown ghazal singers fraternity!

An ad should have something to do with the product unless you are using a celebrity where simple endorsing may be enough. Another exception may be when you do it aesthetically so that people remember the ad and associate it with the product.

Here, none of these is true.

Time will tell. Let us track the popularity of this hospital, say a year from now.

I did not think Country Club would survive its advt-ing, but it has.

Check out the reception of the hospital at 10 am in the first week of Dec 2011. A Poorna Idli treat rides on this!

Well, I am not sure if the success of a hospital depends on the advertising.

They have managed to rope in a famous nephrologist to move with his entire team of doctors, dialysis staff and technicians to the hospital from another hospital which was a stone's throw away.

The ad might serve to draw patients but for me, it did not work at all. I was actually quite disgusted by the whole campaign.

But yes, let's monitor the progress, if only to get you to pay for my weekly Poorna trip next December!

word of mouth is biggest driver of success

Wiki the Dude - His name is... wait for it.. Ghazal Srinivas

Actually he is pretty well respected in parts of Andhra..