There is a legend about Queen Victoria offering a reward of 100 pounds sterling to anyone who could deliver to her the fresh mangosteen! It is such a delicacy. 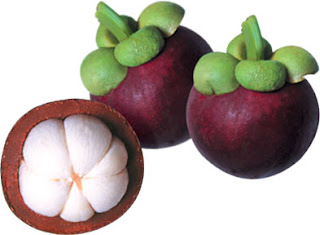 I first ate a mangosteen at a wedding. It was one among many other exotic fruits being served at the dinner. I loved it at once. The waiter would slice through the outer rind of the fruit and then open it up and serve and we took a small spoon and scooped out the pulp. It had a sweet and slightly tart taste and was delicious.

I tried getting the mangosteen in many fruit shops in the city but nobody seemed to have it. The next time I got to have it was at another wedding! After a few such weddings, I was crazy enough about the fruit to actually walk up to the caterer for the wedding and ask him from where he got the fruit. He told us he imported it from somewhere. I asked him if he could sell some to me. He said he would when he got them the next time. Of course, he forgot about it soon.

A year or so back, I checked at Pure 'o' Natural, the fruit shop opposite L V Prasad Eye Institute in Banjara hills. They did have some. I was excited. I bought a bunch of them (they were terribly expensive) and rushed home to feast on them. As I opened the first one the way the waiter did, I was thoroughly disappointed. It was rotten. The next and the next. Almost all of them were rotten. Only one of them was good. My enthusiasm for the fruit disappeared.

A few days back, however, my parents went on a holiday to Dubai. There they saw some Mangosteens at a mall. They bought some for me. Coincidentally, that very same day, I saw some at Q Mart at Banjara Hills.  I bought a pack of 9 for Rs. 500! Very expensive! But what the hell?

They were delicious. Every one of them was excellent. I was thrilled!

When my parents got back a couple of days back, I got to feast on them again. Heavenly!

This is one of my favorite fruits as well. It's quite common in Malaysia when it's in season, so I'm surprised you can't find it easily in India. It costs about USD1.50 for a kilogram.

BTW, I took a look at the video, that is too complicated a way to open a mangosteen! What you do is cup it in your hand and give the fruit a light squeeze and the skin will give way.

$1.5 for a kilogram? Wow! Here it costs that much for about three pieces!

Thanks for the tip. I have some in the fridge. Going to try that now!

They appear to be low in potassium too Kamal - the US department of Agriculture only list the potassium content of canned mangosteens but at 48mg per 100g that's about a ninth of the potassium in bananas.

I want a mangosteen.