on February 10, 2011
Aashayein, the first-ever exclusive event for dialysis patients was a huge success! At one point, a few weeks before the event, Vikram, Sandeep and I were worried about how we can make sure that there are at least a hundred people in all that turn up for the event. In the end there were more than 600! And half of them were patients! By any standards, the event was a hit.

For the first time, 300 patient with a similar set of problems gathered together under one roof and talked to each other, heard people talking about their problems and most importantly - had fun.

The event kicked off with Vikram's welcome address where he described how we came up with this idea. I, as MC of the event, introduced the Hyderabad Kidney Foundation (HKF), its objectives and the plans and then invited the father of Nephrology in Andhra Pradesh, Dr. Gopal Kishen and Joseph Rajshekhar, on dialysis for the last 18 years to formally launch HKF by lighting the lamp. 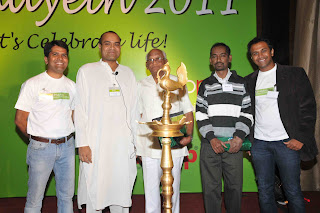 We also had Madhur Deep, a transplant recipient who shared his experience on getting a transplant. Srinivas Perisetty, husband of Monadipa who is on dialysis gave his perspective on how the family of someone afflicted with kidney disease should cope with this. There was also a Yoga demonstration on some simple but beneficial breathing techniques. 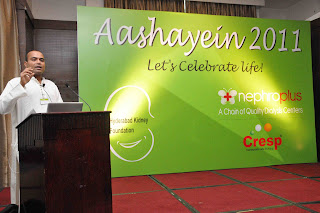 Every talk was interspersed with some entertainment for the patients. There was a mimicry show by Mimicry Hari Kishen, himself a dialysis patient who had the patients in splits with his jokes relevant to people on dialysis, a definite first in India! There was a skit performed by dialysis patients called 'The 7 o' clock shift' which poked fun at the various little incidents that happen in a typical shift in a dialysis unit. 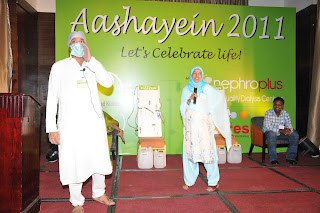 The 7 o' clock shift
We also organized some 'antakshari' type questions for the audience with a prize for each question. 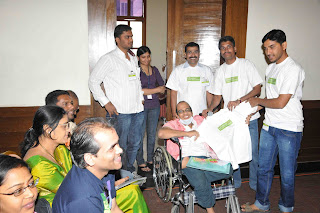 Patient being given a prize for answering an Antakshari question
The lunch was an elaborate renal friendly affair. Patient could eat everything on the menu for a change without worrying about how much salt it had or whether the vegetables were leached. There was a role reversal of sorts. Caretakers had a very simple menu - biryani and raitha whereas patients had a very elaborate menu! After all it was their our day! 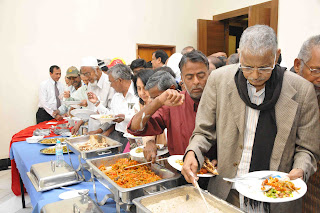 A sumptuous lunch for patients 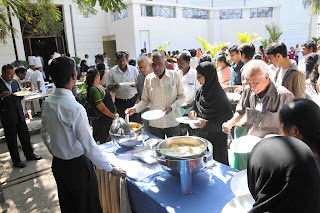 A simple lunch for caretakers!
After lunch we announced the winner of the best fistula contest and had some patients come and present their talent. Some did songs, some did jokes. In the end we had two rounds of Tombola. Every patient was given out a bunch of goodies which included injections, a bag customized for dialysis sessions and other stuff mostly relevant to dialysis patients. 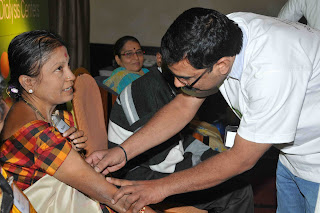 Winner of The Best Fistula contest
After the event, many patients came up to us and thanked us immensely for organizing this. For the first time, someone thought about them and this touched them deeply.

Dr. Reddy's sponsored this event along with NephroPlus and full credit to both the sponsors for making this happen.
aashayein hkf Nephroplus

marien o said…
Kamal, this is fantastic! Nothing is impossible when you throw your shoulders back and seize the day, looking up!
So good to see you go confidently in the direction of your dreams.
You make an old teacher proud! O worthy lad! O mighty heart!
( echoes from our Class 9,Shakespeare days!)
February 10, 2011 at 11:04 AM