In search of the perfect bhindi fry

I used to hate bhindi (ladies finger, okra). When I was a kid, I used to absolutely detest meals at home that included bhindi. The thickness of the outer part with all those gross seeds inside never appealed to my imagination.

I found many people like me. However, there were also some people who would swear by the bhindi. My dad's elder brother, for example, loved it and in an amazing manifestation of the genetic theory, his son did too. I never understood that part of them though.

As I realized over the years, there were no fence sitters when it came to the bhindi. You either loved the vegetable or you hated it.

In Effigent, we had a lot of young developers who were of, as they call it, 'marriageable age'! In their mid-twenties. As it happened, one by one, they would get married. A lot of them were Telugus. So, we would go for their weddings and receptions. Madhavi was one of the earlier ones among this lot.

Now, you might be wondering what Madhavi's wedding has to do with the bhindi? Bear with me for a bit, dear reader!

So, at Madhavi's wedding there was quite a huge spread. There were hot dosas being made at one side. There was the Dahi Wada, the regular puri, some nice sweets and - you guessed it - the bhindi. At first, instinctively, I passed. When my colleagues and I gathered in one area of the dining hall, plates in hand, making our way through the food, one of them remarked how great the bhindi fry was.

"Yeah, right!" I remarked. How can anything remotely got to do with the bhindi be great? He said I should try it. At first I was very hesitant. All the years of hating the vegetable made it difficult to give in. At this point another colleague joined in. "Even I hate bhindi but the bhindi fry is something else!"

That was it. I had to try it. So I went over to the buffet table and took some rice, some sambar and a little bhindi fry. The vegetable had been cut to small circular bits and deep fried and then some masalas added. They were garnished with curry leaves, fried cashews and peanuts.

I put a little vegetable with rice in my mouth. It was really excellent! It was almost as if the entire evil inside the bhindi was exorcised by deep frying it! I went back for more.

Ever since, I have been an ardent bhindi fry fan. I still haven't made my peace with the plain vegetable. The bhindi fry, however, is 'something else'! 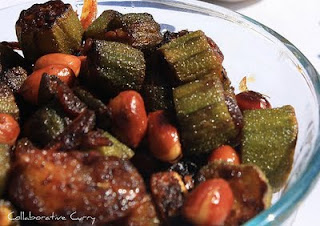 funny memories :) but you got tasted one nice vegetable!