Have you ever thought, how, when a surgeon opens up a patient on the operating table, (mostly!) he finds everything in the right place? The kidneys are where they are supposed to be, the portal vein is where he expects it to be. If he wants to take a jab at the liver, he will know exactly which area he has to look in.

All this, despite not having opened that patient ever before. Well, he probably would have seen scans but heck, those too are mostly on expected lines!

How is every human so alike? Well, externally humans are very different but inside the body, physically, everything is so similar! Normal spleens are about the same size, shape and texture. Everyone has bean shaped kidneys. Almost everyone has two.

Medical science is entirely based on the fact that humans will have mostly very similar insides which will behave very similarly under similar circumstances.

I often wonder, with amazement, how experienced surgeons know their way inside a human body; how skillfully they stitch together veins and arteries from one place into another; how, during a transplant, everything works with clock-like precision. Put the kidney there and connect up all the veins and arteries and within a jiffy you see urine being produced! And all this, despite the surgeon not ever having seen the insides of that patient before!

I find all this totally incredible! 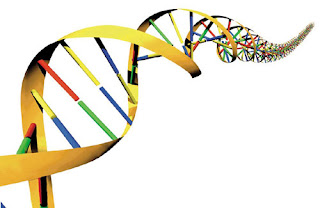 All thanks to the genome! The genome for a species dictates all this, I guess. Everything is encoded in those tiny little structures! Isn't it amazing that those sequences of alphabets should dictate such complex structures, such complex chemical reactions that are happening every second inside our bodies, we being blissfully unaware all the time!

I know you might think I am growing a little crazy here but stop and think for a moment of how all this magically happens and you will be amazed!
at August 13, 2011

It is very beautiful. Thinking about it makes me fill with wonder. There is something else that also gives me the same feeling - evolution.