In search of the perfect Baklava

You might wonder what relativity has to do with finding good Baklava. Bear with me for a bit.

So, there I was, returning from the Indian Society of Nephrology's Annual Conference after winding up the last day this morning (NephroPlus had a stall and coming up is a post on the happenings), I took the short cut from Hi-tec city to Banjara Hills that goes through the road that houses "Sweet Nirvana", a place where I was told you get great Baklava.

Baklava is something I have been dying to eat from many years now. My yearning began when my grandmother returned from the US and Canada after a visit to her son and daughter. Apparently, my uncle, her son, makes great Baklava. My grandmother is very well read and has a flawless command over language. She described the whole process by which my uncle made the Baklava. He laid out the sheets of 'flow-dough' and then brushed it with syrup and then put crushed walnuts and then another layer of 'flow-dough' and another round of syrup and walnuts. And then he baked it at such and such temperature for so many minutes. The whole description caught my fancy and I have been dreaming of eating the Baklava since then. This was at least fifteen years back. 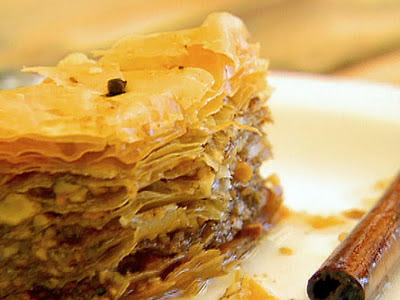 I have eaten what people thought was Baklava. I have eaten what people called Baklava. But I don't think I ever ate what was actually Baklava! Weddings, restaurants, no place served the real Baklava. Note that I had never eaten the real thing to actually know what it was supposed to taste like either. But I had made a mental note of what it was supposed to taste and look like and always compared it to that!!

So, I stopped at Sweet Nirvana and asked for some Baklava. I was told there was only one slice left. I asked how much it cost.

I was asked to sit at a table and wait. Rs. 250 for one slice of Baklava? I started thinking about how I will explain this to my mother!

In a few minutes I was on my way home. The container was opened and my parents asked me what it was. I told them. The slice was fairly big. We all took a portion. My parents said it was 'ok'. I kind of liked it. It was the closest it had come to my mental image and taste.

Then came the tricky part.

"How much did you pay for it?"

"You won't believe it! This thing usually sells for a couple of thousand. But I got it for six fifty!"

"What? You paid six hundred and fifty for that?"

"It is not at all like the Baklava we bought from Dubai. That simply melted in the mouth. Tell me the truth."

My mother was fairly sure the stuff she got from Dubai was better. Especially since this was six hundred and fifty rupees!

After a few minutes of this charade, they were convinced that it cost Rs. 650.

Then I told them, "I was just joking. It actually cost only two fifty."

"Don't tell lies Kamal. I am sure you paid more."

I darted to my room and brought the bill and gave it to my mother.

She was actually quite happy!

I said a mental thank you to Albert Einstein for his theory of relativity and took another piece of the Baklava. I promise that this time it tasted exactly like what I had in mind.
food

Kartik said…
I like it a lot too! I had it a couple of times. It's a Mediterranean dish as far as I remember. The taste was slightly close to double-ka-meetha(when it's still crisp). The texture of course is completely unique(though you could compare it to Khaja :p).
December 12, 2011 at 6:40 AM

sherry reddy said…
Im a big fan of Baklava and the related sweets. Few years back my sister who lives in Sydney bought this for me(Purchased at a Lebanese shop) and I instantly became a fan of this. Sad that we don't get a similar one, Sweeet Nirvana one is not that great. Dadu's Himayathnagr served Balava and it was a bit close to the best one I had.
August 12, 2012 at 12:52 AM

Kamal D Shah said…
Agreed that the Sweet Nirvana one wasn't that good. After reading this post, my mom's friend who stays in the Middle East brought some really great Baklava. That was original and simple superb.
August 13, 2012 at 6:50 AM

Anonymous said…
Baklava is a turkish dessert and thank for the info i also might try them there too "Sweet Nirvana".
December 23, 2015 at 6:10 PM

Next time you visit to Hyderabad let me know, I shell give you better than Nirvana. The authentic one from Turkey (Home made) with its actual taste, which was described by your grandmother.
May 4, 2016 at 5:36 PM

Mihir said…
Munawar,
How did you get it?
Is it prepared in Turkey and shipped here or from someone in India who knows the authentic recipe?

Can you please let me know how to get it in Bangalore? :)

Few months back, a friend of mine brought some Turkish Delights for me, which was completely different from what we get here in India. It was very delicious. By any chance, do you have any idea how to order such Turkish sweets here in India?