Here's to the kidney donors!


I received a transplant in November 1998. My mother donated a kidney to me. In my almost fifteen years with kidney disease, I have seen many people getting transplants. I cannot remember any failed transplants except mine.

Nephrology has come a long way when it comes to better transplant success rates. Most transplants today work for a few years at least. Undoubtedly, transplants offer the best outcomes and quality of life compared to other renal replacement therapies.

Which brings me to the donors. The selfless act of donating an organ to someone is probably the highest form of altruism the human race knows. It surpasses all other forms of generosity. Many people can donate money. Donating an organ requires much more than just willingness. It requires tremendous courage and limitless love for the person donating.

(Altruistic donation is something that I cannot even begin to comprehend. To donate a kidney to someone you know, care for and love is great but to donate a kidney to a stranger whom you have never met and you never ever will is something that is beyond me. I simply cannot understand that. To me that is beyond humanity. It is truly saintly. Yet, there are an increasing number of people doing that.)

Coming to my mother, from the day we began discussing a transplant, she was very clear that she would donate. My father was ruled out because he is diabetic. My brother also was very keen on donating. Eventually, the nephrologist decided it would be my mother because my brother was too young. 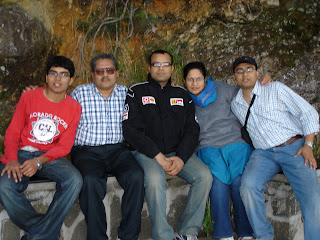 My parents, brothers and I

You can read about the whole story of the transplant here.

My mother, as would anyone about to undergo such a major surgery, was probably very worried. She did not show it though. We went through a battery of tests to determine whether she was a possible match. It turned out that she was. Donors must go through a lot of emotional upheaval. You are doing something so counter-intuitive. Your sub-conscious must ask you, "Whatever the hell am I undergoing such a major surgery for? I am ok right?" But then the heart takes over and says, "I just have to do this! I cannot see him/her suffer any more!"

One the one hand is the trauma of getting under the knife. On the other hand is the promise of liberation from the dreaded dialysis. It must be one hell of a fight! Oh, life!

Surgery day came and went. There were a few hiccups but in the end, I had a functioning kidney. My mother has been totally all right with one kidney. We can all survive with a single kidney. She has never had any medical issue because of having one kidney.

Whatever the outcome, the act of donation and the bravery that went along with it never changes. Though my transplant failed after eleven days with the new kidney, I can never forget what my mother did for me. Well, mothers are like that. Among all the transplants I have seen, most of the donors have been mothers. Yet, as it is in my case, every recipient feels this sense of eternal obligation to their mother. Like she is the best mother in the world. I guess we are all correct!
health transplant