on July 30, 2012
Our cruise ship was from Vancouver to Alaska. Alaska is a breathtakingly beautiful place. It is the largest state in the US. We made three stops at land in Alaska. We also went right up to the Hubbard Glacier!

Whenever a cruise ship either docks or is tethered at land, the passengers generally get off the ship and do various fun things at the port. These are called shore excursions. You can book for these excursions either through the cruise line itself (usually turns out more expensive) or book through websites on the internet (you can usually get good deals like this). Despite having Dinesh with us, we did not manage to book in advance and had to pay the full cruise line fare!

Our first stop was called Icy Strait Point and was located off Hoonah, a fishing village in Alaska. The weather was quite cold. My buddies tried to convince me to agree to go on the Zip line ride where you are on a small seat without any base that goes at a height of several hundred feet across a rope from one hill to another hill. I refused. I was sure I would have a cardiac arrest and die if I did that! We finally went on a kayaking tour which was great fun! Two on each kayak, we paddled in the ocean itself close to the shore. the entire trip lasted about three hours. 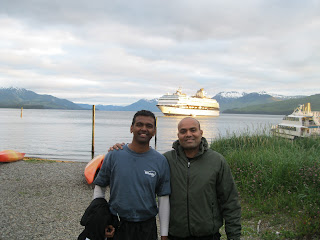 Dinesh and I after the kayaking trip

The next day the ship was to go to the Hubbard Glacier. As we neared the glacier, the weather became colder and colder. On the way to the glacier, we started seeing many chunks of ice floating on the water. 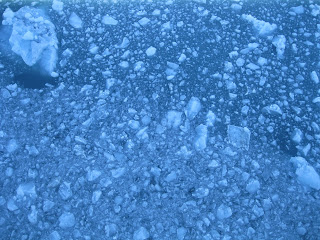 When we reached the glacier, almost everyone on board gathered on the various decks to get a glimpse of the magnificent glacier. We were all on the upper decks getting pictures and taking in the beauty of the whole scene. 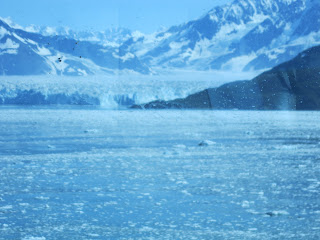 The captain came on to the PA system and told us some interesting facts about the glacier. We also saw parts of the ice breaking away and collapsing. They took three 360 degree turns at this point to enable everyone on the ship to get a good view of the glacier and get as many pictures as they pleased. Once everyone had had their fill, the ship was steered in the opposite direction away from the glacier. It truly was an amazing day!

The next stop was Juneau, the capital of Alaska. The weather was awesome here and we decided to to see the Mendenhall Glacier and then do a river rafting trip down the Mendenhall river. We were given special gear that would prevent us from getting wet in the icy cold water. We got into the rafts. There was a guide with us who helped steer the raft while some of us paddled. We first went up to the Mendenhall Glacier, got a better look and then headed down the Mendenhall river which is basically formed by the melting ice from the Mendenhall glacier. The river had rapids of Levels 2 and 3. We had a really good time rafting and did get our fair share of thrills. The river ran through areas which were inhabited and there were some really beautiful houses on both sides. At the end, we were given some warm Apple Cider with cheeses and crackers. We were all also given a "I shot the Mendenhall" badge!

After rafting, some of us took the tram ride atop Mount Roberts in Juneau. The view from the tram is just amazing. 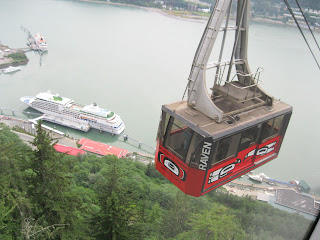 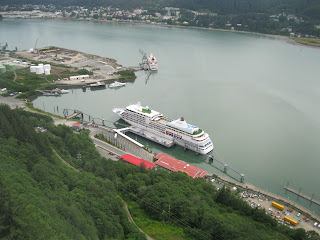 The last stop was Ketchikan where we did not do any excursion but went about the town and got a cup of steaming hot coffee. It was drizzling and it was great to get good coffee in that weather. 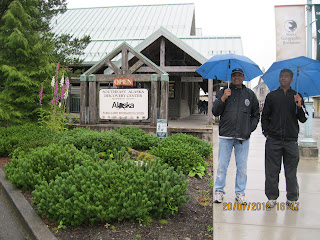 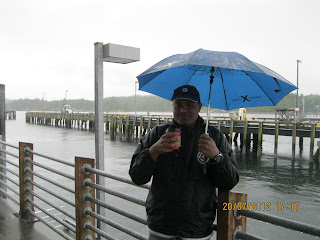 Alaska is probably the most beautiful place I have seen. The weather, the natural beauty and the great maintenance by the authorities make it a must-see destination. What more could I ask for than to see Alaska as part of the cruise?