Dialysis in the middle of an ocean

During my seven night cruise, I got three dialysis sessions. Monday, Wednesday and Saturday. The sessions were all four hours each. The company that facilitates this is called Dialysis at Sea. They take up a couple of rooms in the medical facility of a cruise ship and they pay the cruise fees of a nephrologist and the necessary dialysis nurses and technicians who are supposed to administer the treatments to the patients.

The dialysis sessions are done only on three days. That is, the days are all fixed. So, during our cruise, ALL patients got their dialysis sessions on Monday, Wednesday and Friday. These are basically the days when the ship is completely at sea and is not docked at any port. They had four dialysis machines and that meant they could dialyze four patients at a time. They had three shifts. I had chosen the last shift - at around 1:30 p.m.

The idea is to get you good enough dialysis so that you can take the cruise. They do not offer nocturnal dialysis which meant I had to watch my fluid intake and diet.

The nurses and technicians were quite good. They knew all the basic stuff and could take care of complications. They were very well trained. The nephrologist would visit us every session, do a basic review and adjust any dialysis parameters if needed.

I generally use 16 gauge buttonhole needles. They did not have 16 gauge but had 15 gauge needles. Luckily I had carried my needles with me and used those. I inject a little lidocaine (xylocaine) in my sites just before cannulating to reduce the pain. Though they had lidocaine they did not have the needles necessary to administer it. Luckily I had taken the syringes I use to administer the lidocaine as well. I used this.

The dialysis sessions were all uneventful. The weight gain was never too much and the fluid could all be pulled off quite comfortably. I guess I was too busy having a good time to think of fluids!

I managed to get only a little sleep during the sessions. The rest of the time I blogged using my iPad, heard some music or chatted with the nurse.

On Friday night however, I felt a little sick. It was a mixture of nausea and fever. I took a Dolo (Paracetamol 650 mg) and a Zofer 4 mg tablet. This helped me feel better.  It was probably the two day gap. I had never given such a long gap in my dialysis in a long time. The next morning also I felt nauseous and took a Zofer again. After a while I felt better. I then got my dialysis on Saturday and felt much better.

All in all, I think it was ok. I would have definitely liked to have access to daily, nocturnal dialysis on the ship but this was a good compromise. The trouble is you lose out on about 5 hours of your day which could have been spent having fun. And then of course, there is the issue of the aggressive dialysis compared to the gentle dialysis I am used to. This dialysis did make me feel kind-of zoned out after the session which did not allow me to stay up that late in the night.

Dialysis at Sea is doing a great job with this. They have made cruising possible for folks on dialysis. This would not have been possible without them. Yes, the charges are a bit high but at least it is possible! Here is a picture of me on dialysis aboard the Celebrity Century: 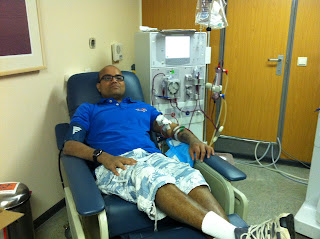 hope u r enjoying the US trip and especially the cruise :)