on August 08, 2012
From Las Vegas I flew down to Toronto. There are a bunch of things you can do in Toronto. However, my visit to Toronto was with only one motive - The Niagara Falls. I had seen pictures of my parents' trip to the place and had been mesmerized since then by the majesty of the falls. When I started planning my trip, there were two things that were absolute must-dos - the cruise and the Niagara Falls. So, I had one complete day in Toronto and the Niagara Falls it would be!

I stayed with Leslie Uncle and Glynis Aunty who stay in Mississauga, which is very close to Toronto. They picked me up from the airport and straightaway took me to the local Saravana Bhavan where we had a great thali. The next morning we headed out at around 10:30 to the falls.

We got to the falls in about an hour and a half. As we arrived, we were driving down the road by the falls and making our way towards the parking lot. The falls were slightly visible from the road itself. I tried not to make visual contact with the falls until we were ready. I looked away. I did not want to take a small glimpse and then have to do something else. I wanted to take it in completely.

After getting off the car, I walked towards the falls and then managed to get a vantage point. I then started taking in the whole scene. It was absolutely breathtaking! I learnt later that at peak flows, about 5.7 million liters of water flow down the falls every second! 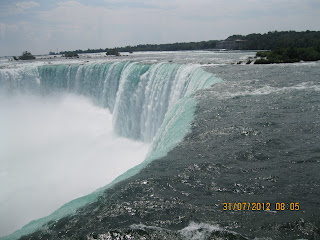 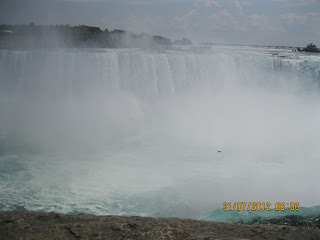 The whole thing was so spectacular! This humungous quantity of water falling down this great height and then flowing off is only to be seen to be believed! The water roars as it falls down and you can hear the roar from quite far. It was difficult to take my eyes off the falls for a while.

I then went down an elevator to a tunnel that has three outlets. Two of them allow you to see from the sides at the base of the falls. The other outlet has a balcony where you can actually go very close to the base of the falls and feel the water! This was one of the most exhilarating experiences of my life. It was difficult to capture on camera as well because of the water that is spraying on you continuously from the falls! 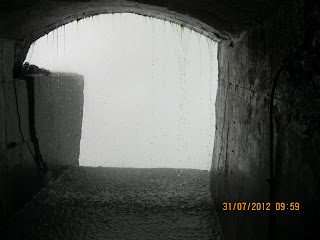 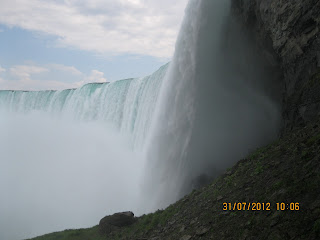 After having my fill, I went back up and then we went for the famous Maid of the Mist ride. On this ride, they take you in a boat past the American falls and then right up to the Canadian falls. This was also just too good. 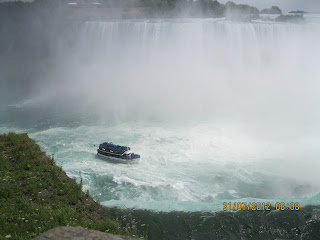 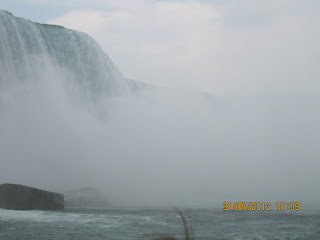 The visit to the Niagara Falls was probably the highlight of my entire trip! I leave you with a video I took of the falls: