We got off the cruise on 22nd of July at Vancouver. Dinesh was to drop me off at the airport before heading back to Seattle. We had a few hours in between though. We thought we would go around Vancouver and have lunch before going to the airport.

Discipline, discipline is the thing!


One thing that struck me as we drove around the city was that the hedges in all the houses were all trimmed so perfectly! Every single house had the hedges in a perfect straight line. It was almost as if it was from a picture. On checking I learnt that this was imposed mostly by the local authorities who penalized people who did not maintain their lawns and hedges in a neat manner!


We went over to the beautiful Stanley Park which is one of the largest urban parks in North America. We drove around a bit and then went to take a train ride in a small area of the park which focusses on the Sasquatch. The ride is mainly for kids but adults join in as well. There is a story that is narrated on the public address system about the Sasquatch. As the train goes along, there are people enacting small scenes from the story. Pavithra wondered whether they did that again and again the whole day! What a boring job! 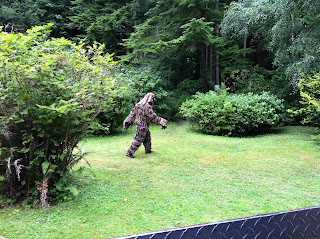 A scene from the Sasquatch story 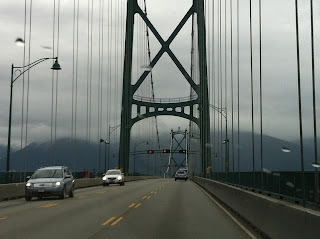 As we left Stanley Park, we took this bridge to get to the rest of the city

During the cruise we did get good food. It was mostly bland stuff though. Pizza, pasta, salads, bread, dessert etc. There was very limited Indian food. For lunch and dinner there would mostly be plain rice and a dal with some papad. For breakfast there would be one Indian dish like upma or poori bhaji and so on.

Though I really like this kind of food, the moment I got to know that there was a Saravanaa Bhavan in Vancouver, I had this inexplicable craving for South Indian food. I got Dinesh to take me there. They had a buffet which was amazing. Poori, curry, sambar, rasam, dal, dosa, idli chutney, papad, pickles and payasam. We had a sumptuous lunch. I loved it absolutely! 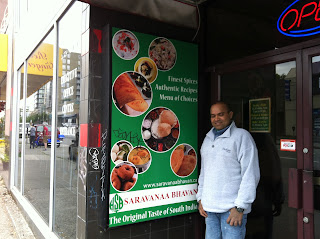