Finally got my bread recipe right!

I have been baking bread at home for the past year or so. My parents got me a bread maker back from the US. Now, this bread maker had an option to make instant bread - yes, there is something like instant bread - it takes only an hour to make compared to the three plus hours it takes to make regular bread. Can you believe it?!

For the 60 minute bread, you need a special kind of yeast. In India there are very few people who bake their own bread. So the yeast that you can use to bake bread is not available easily in supermarkets. My parents brought back yeast that could be used with the bread maker.

I started trying the recipes that came with the bread maker. All of them tasted really good and would have excellent texture. There was only one problem - they rose too much and caved in during the baking cycle! This did not happen with the instant bread though. It happened only with the regular recipes that took more than three hours. Instant bread though convenient was not as fluffy as the regular bread.

I did some very preliminary research on the internet a few months back but did not find much help. A couple of weeks back, I looked some more and found what sounded promising. On a forum for people who baked bread at home, there was the mention of checking the type of yeast you used. Bingo! That was it! I was using Instant yeast but the recipe called for Active Dry Yeast!

As it turns out, the Instant Yeast is meant for the Quick Rise recipes (that take an hour) whereas the regular Active Dry Yeast is used for the traditional recipes (that take more than three hours). There were multiple suggestions on how to replace the regular yeasts with the instant yeast. Different people suggested different substitution formulae ranging from taking 80% to 25% of the quantity specified for the active dry yeast if you were using Instant Yeast.

I decided to try it that day. I took half the quantity. No luck. The Italian Herb Bread I made caved in again!

This morning I decided to try with a third of the quantity specified. I tried the Cinnamon and Raisin Bread. I was a bundle of nerves as I waited patiently for the bread maker to go through the two kneading cycles and then the final baking cycle. Lo and behold! A perfect loaf of bread was ready! Here's a pic: 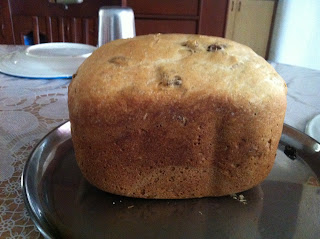 WOw! This is something!

Wonder why it took a Chemical Engineer so long to figure out that cooking/baking is all about ingredients and process.

Good chefs display their successes, but to achieve them they go through countless failures in their own kitchens. I have heard several gourmet chefs exchange their failed experiences with each other.