The Wearable Artificial Kidney - closer than you can ever imagine

When I first heard about the Wearable Artificial Kidney (WAK) by Dr. Victor Gura of Cedars Sinai-UCLA, I was a little skeptical. I thought it was good but it would be out in the market long after I was gone! These kinds of revolutionary treatments or devices usually take decades, if not more, to reach the common man, especially in countries like India.

For those who are not aware of what the WAK actually is, let me give you a small introduction. Dialysis machines currently are bigger than a typical washing machine. My machine is about 5 feet in height and about a foot and a half square. For my treatments, I need about 300 liters of pure water - water that has been treated by a Reverse Osmosis process. The water purification machine is also fairly large and I need a special storage tank to store the treated water. You can imagine how big the whole setup is. Not portable by any means. 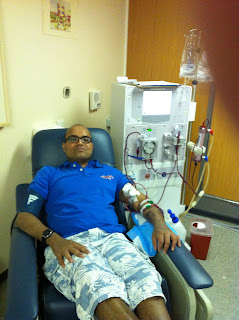 A few years back, a machine called the NxStage System One was released. This was a true game changer. It reduced the size of the dialysis machine to about the size of a multi-function printer. It was also designed to be very easy to use so that patients could actually use it at home. This machine gave a lot of freedom to patients. They could now dialyze at home, they could travel with ease. 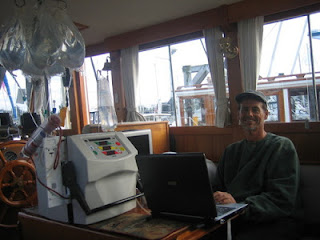 Bill Peckham with the NxStage System One

The WAK takes miniaturization to a whole new level. It can actually be worn around your waist like a belt. It is completely portable and does not require a water treatment plant. The power requirements have also been reduced to such an extent that the machine can run on batteries! 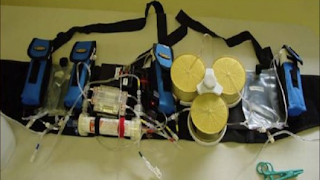 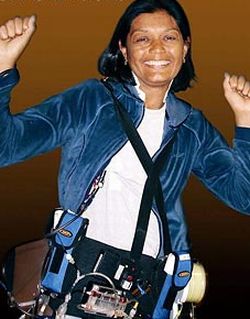 The WAK received a huge boost when the FDA (authority in the US that must approve any new treatment or medication) included it in the Accelerated Development Pathway program which meant that the device would not need decades before it came to market!

I recently interacted with the man himself! Dr. Victor Gura and his company Blood Purification Technologies are now on Facebook! I sent him a message asking him about the time he estimates this device to reach active production and about his plans for countries such as India. He responded saying it should take 2-3 years and that they would try their best to ensure that the device becomes available in as many places as possible!

The trick will be to avoid being gobbled up by the companies for whom this device will not make sense. The money power of large corporations for whom profits are more important that saving lives is a real danger in the development of this device. More than the technological ability to develop this device, Dr. Gura will need some extraordinary management and strategy skills to help him ensure that the device reaches the intended beneficiary - the patient.

I'm awe struck kamal! Good to see know fast technology development in health care too. It gives the freedom to travel and to do more in life. But there could also be some complications like infections (as read in your blogs) which are very frequent in dialysis units. Hope the manufacturer takes care of this point most importantly.
And BTW, what is the estimated cost of one WAK once its out in market? I mean approx. cost? The price actually determines to how many patients can benefit from this.

And BTW, you mean 300 liters of water per dialysis session?

Thrinath, the chance of viral cross infections is eliminated with this machine. I have no idea about the cost. I totally agree on the point that the price is what will determine the number of patients that can benefit. And yes, I need about 300 liters of purified water per dialysis session! The horrifying thing is the amount of raw water to produce this pure water is much more than that!

As a long time PD patient I have to ask can this system be unhooked completely? If not how can a patient take a shower, swim or have sexual relations without the pump, fluid or battery being in the way or damaged? I do all of them without any problems with CAPD.

I have had the privilege of spending a lot of time with the man himself - Prof. Victor Gura when he visited India this year. I asked some of these questions to him. He said the idea was to not take off the machine for about a week at a time and once a week, it would need to be removed to change some of the consumables.

He said however, that we could shower with the device on! Swimming wold not be possible. Sex - I did not ask!

You can ask questions on their FB page.

Thank you. Interesting and more choice for patients is always a good thing as we all have different priorities. When I started dialysis in 1977 Transplant and in center hemodialysis were the only options, although peritoneal was around infection and death rates were high so it was a treatment of last resort. I've seen choices grow which creates better outcomes for all patients. After all, quality of life is what is most important.

Dear Sir,
Has this been successfully launched ?
I am a CKD patient waiting for such technological innovations to save my body.
Please reply
Thanks and regards
Govardhanan
ngovardhanan@gmail.com

Not yet Mr. Govardhanan. I wouldn’t expect this for a few more years.