I landed in Amdavad's Sardar Vallabhai Patel Airport expecting to be greeted with a blitzkrieg of election related publicity, large hoardings, huge rallies and more. I was surprised to find hardly any sign that elections were on. The only thing we saw were two small rallies taken out by BJP supporters. Modi, they say is all set for a third term. This time he is expected to get a bigger majority than last time which will put him firmly at the forefront of the BJP campaign for the 2014 general elections.

Though this will alienate a lot of voters and allies, I don't see how the BJP is going to avoid projecting him as their Prime Ministerial candidate. Ever since it lost power, the BJP has lost its way completely. Without a clear agenda, with no leaders of the stature of Vajpayee, complete confusion on important issues and the worst of them all, corruption among many top leaders, the party with a difference is no longer very different from the GOP of India politics. As I said before, Narendra Modi is at once the BJP's biggest blessing and its biggest curse!

We landed at around 9 in the morning. We were all hungry. Suggestions of idli and dosa were quickly shot down. We were in Gujarat after all! We should do a typical Gujarati breakfast was the general consensus. We called an acquaintance who recommended Oshwal. We reached the shabby looking place in about half an hour and took a table. We ordered Jalebi and Fafda. The food was priced quite high. Rs. 50 for four jalebis and Rs. 60 for a plate of fafda. 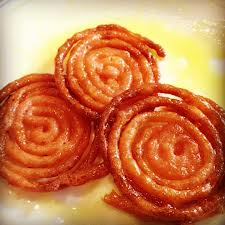 When the food came, we were delighted. The jalebis were some of the best I've had - thin, crisp and just the right degree of sweetness. The fafdas were served with grated raw papaya, fried chillis and kadhi - a first! Very delicious. We ordered more! We also ordered Methi na gota and Mag ni daal na bhajiya, both very well made, crisp exteriors and soft within. One thing that struck me was that every single thing we had that was deep fried! Welcome to Gujarat!

It was a great start to our short trip.

It is said that no one can go to Shatrunjay without a call from Dada Adishwar! I experienced this first hand. Shatrunjay is the most sacred teerth for Jains. Many devout Jains in Gujarat make it a point to visit this teerth at least once a year. We, in the South are less fortunate and our visits are much less frequent. Before this trip, I had visited this great teerth a total of two times. Pathetic! This year, however, from the past couple of months, I suddenly had this strong urge to go there. I have no clue why. I don't know what triggered it. I started looking at options for flights. I checked if it was possible to go on one day and come back the next day so that I don't have to miss my dialysis. I did not want to miss more than one session. It wasn't looking possible.

Then, believe it or not, on my brother Prasan's birthday, his wife, Anjali surprised him with tickets to Amdavad to go to Palitana (the town around the Shatrunjay)! Prasan and his son Naman were to go. Prasan called me and asked my parents and me to join him. I hesitated for a bit. I would miss two dialysis sessions. But I felt it all falling in place. I agreed to go!

Our yatra went off really well. We got started around 7 in the morning. We reached up in about two and half hours. The number of pilgrims was extraordinarily high that day. We completed our pooja and the five chaityavandans and were back down by around 1:30 in the afternoon.

There were some people who were doing the chauvihar chhat with seven yatras - a feat that is beyond me. How can someone stay without food and water for two days and actually climb the mountain seven times during those two days. It is said that such people achieve liberation within three bhavs. An apt reward for a superhuman endeavor!

The next morning, I went off alone to the Jay Taleti and spend some moments of quiet solitude. There was considerable rush at that time as well but the peace in the early morning hours is unimaginable.

We returned to Amdavad that day. We had a few hours to kill before it was time to get to the airport. My brother suggested we go to see the Sabarmati Ashram - the place were the Father of the Nation stayed for twelve years after returning from South Africa. The rest of us were not terribly excited by the idea but agreed nevertheless. I expected us to be the only people there but was surprised to see many people visiting the ashram. It was a motley crowd - some Germans, some Indian youngsters clad in shorts, some very typical Gujju families. It was a very peaceful place, well maintained, not the typical, picture perfect lawns but more natural greenery.

We saw the main ashram and then the modest house where Gandhiji actually stayed - the room he sat and spun the charkha, the kitchen, where he met people etc. The ashram led to the Sabarmati river which probably made for a very peaceful setting before industrialization led to the river being polluted heavily by factories. The ashram has still retained its charm oblivious to the dramatic changes that have taken place just outside its hallowed precincts.

Just before the Ashram, we went for lunch to Gordhan Thaal, Amdavad's famous thaali restaurant. They serve an amazingly delicious and elaborate thaali with very well made dishes, authentic Gujarati recipes in a very good ambience. My favorite item on that day's menu was the Rajbhog which was a saffron colored shrikhand. The other tasty items were the bajra rotla, the kadhi, the dal and the samosa. They have everything available in the Jain variants as well. 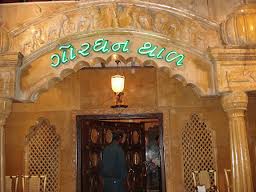 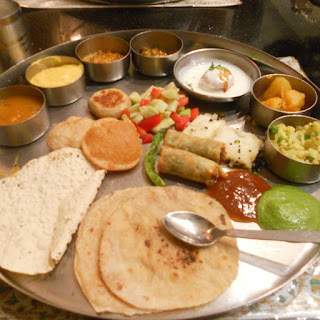 They don't serve any soft drinks but the helpful manager conceded to a request from my nephew Naman for a cola which he arranged from the neighboring kirana store! We were quite surprised by the price of the thali. Given the elaborate nature of the meal, we expected it to be in the Rs. 350 - Rs. 400 range. It turned out to be only Rs. 220. A steal by any standards!