I found all this taken away from me when I switched to the Google Nexus 4.

Take copy-paste, for example. When I selected some text, I got some icons on the top which, I figured, could be used to copy the text. When I went to another app to paste the text, I couldn't get it to paste. I tapped and held for a few seconds, clicked the three vertical dots on the top right, did this and that and a couple of other things that I thought would do it. No luck. I typed out the text.

This brings me to consistency. Any user interface should be consistent. On Android, for going back, you use the back icon on the bottom left sometimes and at other times, you use the back arrow on the top left. So, most of the time, you are wondering whether to use one or the other. You pick one. Its usually the other. Why can't you just stick to one of them?

The three vertical dots. Its like a right click I think. The only trouble - its sometimes on top and sometimes at the bottom.

The placement of the lock and the volume buttons was another thing that got to me. Every time I tried to lock the phone, I would either increase or decrease the volume of the phone!

Google Now and controlling stuff with your voice was cool. However it was not smooth. I somehow doubt the utility of these things. How many people have you actually seen use Siri or Google Voice search on a regular basis? You use it to show off to someone. Not to really search for some information you really need. Not to really fix a meeting. At least not now. These tools are much less than perfect to be used smoothly. Honestly. Even Siri. And by the way, Google Now is available as an iOS app.

The so-called freedom Android offered was also scary at times. A friend showed me an app on his Samsung Galaxy something. It was kind-of cool. I don't remember what it does now though. I asked him what it was called. He told me. I told him I would get that from the Play Store as well. He said it was not available on the Play Store. He said he would email me the file and I could just install it.

What if it had some horrible code that stole my credit card information and robbed me of my billions of dollars? What if it took secret pictures of me and posted it on my FB wall? What if it tweeted that I was a huge fan of Rahul Gandhi? What, in God's name, would I do? How would I show my face to the rest of the world the next morning?

No, please give me Apple's closed garden any day!

However, what they have already done is, AT LEAST FOR ME, AT LEAST FOR NOW, really great! I don't think I would switch to any other phone for years. 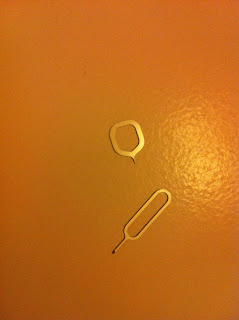 Switching back to the one below!

So, I have now completely switched back to my iPhone. My Nexus 4 was available for sale. This morning, my friend Venkata Subhash Tummala picked it up. Pretty fast. There must be something about it. True. But I just don't get it!
iphone

Sandeep said…
Hello Kamal, I read with great interest your experiences (all three posts) with "another phone" than "THE ONE". I must say I identified with almost everything you mentioned - I too find myself in the same boat - I have been an iphone user (3GS!!) but havent upgraded for the longest time for precisely the same reason - i dont think the upgrades have anything substantial to offer. at the same time, I find myself flirting with the idea of changing to some other phone but havent just got down to it....btw I loved the way you put it - Samsung something - again, precisely the reason why i havent migrated to samsung - i cant for the life of me figure out what i should go in for from amongst the notes, grands, galaxies, megas and what not. all said, i think i will take a leaf out of your book and stay faithful to THE ONE....infidelity demands something extra special that the competition will have to do. btw, I like your writing style - you write in a very conversational style which is very easy and pleasant to read. Look forward to reading your blog. cheers Sandeep
May 28, 2013 at 11:45 PM

B said…
I started with 3GS...then moved to 4GS and now have I5. I am also "bored" and want something else and flirted with nexus 7 that I ended up returning due to wifi issues (no 5 ghz).

Anonymous said…
Most of what you wrote is absolutely funny.
You seem like someone who complains about everything like the volume when you try to close it, c'mon man, it's stupid. And a malicious code might stole your credit card.
Thats what they say about apple users, afraid of technology and innovation but more focused about design and simplicity which I agree, apple has a great phone. The only complaint i agree with, is that copy-paste is pretty shitty :-)
February 18, 2014 at 6:29 AM