Why I switched from my iPhone to a Google Nexus 4

I have been an Apple user ever since 2000 when we started Effigent. Obul Kambham got me hooked. I have used only Macs since then and become irritable when I have to use a Windows or Linux computer. Obul gifted me my first iPhone a few months after it was released. I was thrilled. I have been using only Macs, iPhones and iPads all these years. I got myself an iPhone 4 (my phone until I committed treason) around March 2011.

There was nothing wrong with my iPhone except for two little things. Sometimes, when I got a call, even if I swiped to answer, nothing would happen. The phone would continue ringing. I figured out some time back that if I pressed the volume buttons and then tried again, it worked. The other problem I had was after a call, despite tapping the End Call button, the call wouldn't end. I would have to do something else, return to the call and then end it.

Apart from this, there was one big problem I had with Apple with regard to the iPhone. Nothing new. Apart from becoming longer, thinner and getting better screens, there was nothing really 'different'. This from a company that took pride in "Think(ing) different!"

I wanted something 'new'. Something that was not the same old phone. Then Jayadeep, a dear friend who is a firm believer in (and contributor to) open source and all that jazz started talking about the Google Nexus 4. He said some very good things about it. He also got one. The best part about it was you could get it for around 20K in the US and the phones were all factory unlocked!

I also happened to read this article on Gizmodo. I was convinced. I went onto the Google Play Store and ordered one. My brother Prasan, a self-confessed Apple fan happened to be visiting the US and he picked it up for me. 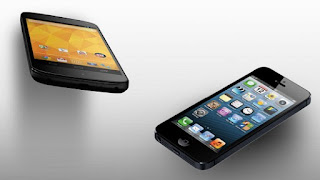 So, there I was, a huge Apple fan, switching to the Google Nexus 4 after all these years of using only Apple products. At least I proved the folks who accused me of being biased wrong.

(Tomorrow: My not so smooth ride with the Nexus 4)
iphone