I wrote a few days back about my Margherita cravings. I had decided at that time that I had to make this pizza from scratch - dough, sauce and all. So, last night, I set about doing just that.

First off, I had to make the dough. I had made regular loaves of bread in my bread maker. Though there were recipes for pizza dough and other doughs you used to make buns, croissants and the like, I had never got around to actually trying them. All I made was regular sized and shaped loaves of different flavors. So, yesterday, I religiously followed the recipe for pizza dough that came with the bread maker. It was a simple recipe - flour, water, vegetable oil, salt and yeast. The preparation time for the dough was an hour and a half.

In the meantime, I started working on the sauce. I looked up some recipes for the sauce on the internet and found different versions that contained different ingredients! I decided to experiment here. My cook had prepared a tomato puree and I added some olive oil, some grated parmesan cheese, small quantities of basil and oregano, two teaspoons of honey and salt and let the mixture boil for a while.

When the dough was ready, with my mom's help - I have not kneaded too much dough in my life, you know - took out the dough from the bread maker and then moved it to the pan that would go into the oven - a lowly electric oven, nothing close to a Forno Bravo :-(

My mom spread the dough on the pan and then put a little olive oil on it making sure it was spread evenly. I then poured some of the pizza sauce and generously topped it with mozzarella cheese and some basil. The pizza at least looked promising!

I baked it for 25 minutes at 200 degrees Centigrade. My grandmom (who stays next door) heard I was making pizza from scratch and she promptly stopped by to sample a slice! We all waited anxiously.

At the end of the 25 minutes, we removed the pizza and my mom cut it into slices and served each of us. I was a little nervous. I took a bite. It was delicious! The dough was very well done - nice and crisp, the sauce was really good and the mozzarella cheese with the basil added to the taste.

My grandmom and mom praising it as well. They seemed to absolutely love it. My dad loved it as well. My mom was so excited that she called my brother, Prasan and his son, Naman who were on their way to an ice-cream store to stop by and try it.

I am so glad it turned out well. There are a few ideas I have to try the next time. I leave you with a pic of a slice from my plate! 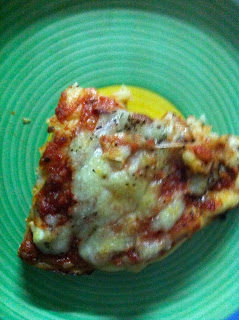 Home made pizza is always the best simply because of the effort you need to put in! It does look good ....

Kudos Kamal on your success with making the pizza. You have now motivated me also to try the same. The only trouble is that once I know I can do it, there would be no stopping me:( As it is, I am in shape since round is also a shape - with pizza making ability, I know things wont end well :)) - but all the same great going - Sandeep

Hi Kamal - my 78yr old father just started with PD. Is processed food like cheese allowed during dialysis? Just checking....so that I can attempt a pizza too at home for him - he is a FOODIE!!

Just like you gave me advice on investments, Sandeep, here is some advice on being in shape - though I am not an expert! I think the key while eating is moderation. And regular exercise.

Chaital, cheese is generally high phosphorus. A little should definitely be ok, especially on PD. Make sure he is taking his binders if his phosphorus is too high.