on July 17, 2013
Continuing on my cooking experiments, this Sunday, I decided to make Ratatouille. Ever since I saw the movie, I have wanted to make and eat this dish. For a while, I have been researching recipes on the internet to find one that looked like it would taste good. I found this recipe on All Recipes and decided to go for it this Sunday.

That morning, I realized there was no zucchini (toora) at home. So, on my way to Poorna Tiffins with my brother Prasan, I stopped at a vegetable shop to buy some. Prasan and his wife and kids were coming home for lunch. Whenever I try something new, I make small portions. Especially with a dish with a name like Ratatouille, you are never sure of the taste. Our Indian palates are used to masala in everything. The masalas overshadows the taste of the rest of the ingredients. And Ratatouille has no masala!

So, I was to make a small quantity for me to taste and maybe a small bite for the rest of the folks. When Prasan heard that the dish was called Ratatouille and it had zucchini - he hates zucchini - he said he would not even touch it! Anyways, zucchini was bought, the idlis were had and I returned home to get going on my experiment.

Ratatouille is a fairly simple dish to make despite all the fanciness in the name! You basically dice eggplant (baingan) and sauté in olive oil and parsley. Layer it on a baking dish and sprinkle some salt and parmesan cheese. Then add layers of sliced zucchini (toora), diced tomatoes and sliced capsicum (for non-Jains, you also have garlic, mushroom and onions), each time sprinkling some salt and parmesan cheese. Bake for 45 minutes at 150 degrees centigrade. That's it, you're done!

When the baking was completed, I was alone at home. I sat down on the table and took a spoonful. It was very, very good! I took another spoonful. The flavors of the different vegetables along with a hint of olive oil and parsley all blended in beautifully with the parmesan cheese and made for a great experience!

I finished off half of the small quantity I had made and left the rest of it from my family. When they got back, Prasan's kids took one look at the bowl and loved what they saw - it did look very good. 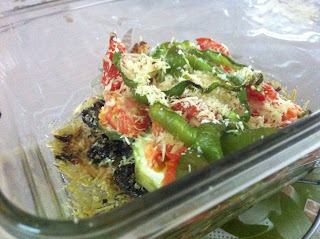 They took a bite each and absolutely loved it! My mother took a spoonful too and loved it as well. My brother Prasan was, by now, quite intrigued by all the fuss over food that had such a weird name and had something as horrible as turiya (as zucchini is called in Gujarati) in it! He wanted to take a full bite as well but could only manage to get all of one tomato piece!

I sat there watching all the fuss, enjoying myself thoroughly, feeling smug that I had done so well!
food