When we reached LAX airport around 7 a.m., I saw this huge queue outside the terminal. I went up to the door and said that I had already check-in online, I just needed to drop my bags and go. The guard at the door said, "Please go all the way back to this line!" I made my way to the end of the queue. After about 45 minutes, I was able to get inside. To my horror, there was another queue to check-in! I got on to that queue. I saw a sign on the check-in counters that said, "Check-in cut-off 45 minutes" I was already past that cut-off. I asked another security person about this. She said I would need to re-book on another flight!

For the first time in my life, I had missed a flight!

I waited in the re-booking line and after an agonizing wait of about another hour, I was put on the 1:05 p.m. flight to Denver! This put paid to all my plans for Denver! I would barely have a few hours.

I reached Denver around 4:30 p.m. Chittu, my childhood buddy from school picked me up from the airport and took me to Denver downtown and we spent some time at the famous 16th street. The weather was awesome. A slight drizzle and a gentle breeze - just my kind of weather. We walked for a while on this street, had dinner at a place that had outside seating - I had wanted to do this again (after Spacca Napoli in Chicago) and we headed back home. 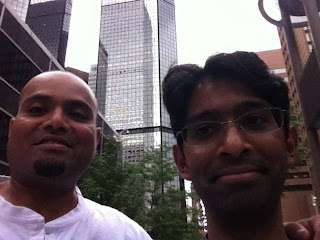 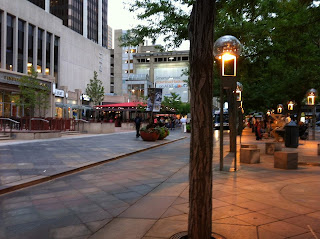 Dialysis at Denver was pretty uneventful. I pulled off 3.5 liters again. No problems whatsoever. On my way out, I remember that no one had asked me for the payment! I went back and told them that I was supposed to pay for the treatment. All hell broke loose. They were not sure how to handle this. They were not used to collecting money for treatments. After all, no one in the US pays for dialysis out of pocket! They then checked some stuff and collected my money order.

Dialysis & flight on the same day - not good!

I had to rush to the airport after my dialysis via Chittu's house. I was feeling quite drained. I ate something at the airport and then boarded the flight. The two and half hours were quite bad. I was feeling very weak and the cramped seats on the plane made things worse. I was just waiting for the flight to land. Once the flight landed, I had to go to another terminal to catch my flight back to India.

All this was quite a task. I can handle all this on a non-dialysis day or even on a dialysis day when I am at home doing nocturnal. But a regular four hour session just saps me of all my energy and then to take a long flight can be very difficult. These are things which people with healthy kidneys so take for granted! Not so when you're on dialysis!

Anyways, I am now back home, slipping in slowly into my daily routine. I still sleep off for long hours at weird times and wake up at 3 a.m. every day! Hopefully, that should settle down soon.

I am very relieved to be back to my daily nocturnal sessions. But the extent of damage done by regular four hour sessions is evident when I realize that I just don't feel normal after my sessions these days. I feel very drained, tired, weak and need a few hours to recover. I remember when I switched to nocturnal for the first time in 2006, it took me some time to feel well enough after dialysis to be able to swim and do other things immediately after dialysis. Four regular sessions have been enough to set me back on this!

Email ThisBlogThis!Share to TwitterShare to FacebookShare to Pinterest
Labels: diary, health, US trip

I really love reading your blog Kamal - I cant quite put my finger on it but trust me, you have this ability to transport the reader to the place that you are actually talking about. All this in a brief blog entry - imagine what you can achieve when you have the license to go descriptive. Bro, you must think seriously about writing a book. What about a compilation of your short stories? And btw - salut for pulling of the US trip so smoothly. Sandeep

This is a very inspiring post.I have been hearing about your passion to help dialysis patients, but only today i knew that you too are undergoing dialysis. My husband is on dialysis for the last seven months.I will make him read your inspirational post. You are truly brave. I admire you.

Thanks so much Sandeep!

It's truly a inspiring post. I been following your posts regularly now and like to check with you regarding dialysis cost involved without insurance in US. My mom is coming next month to US and I'm scheduling her dialysis in DaVita center. They quoted me approx $480 per visit. I'm not sure it covers everything including heparin. So please let me know your experience in US.

Vijey, please send me an email at kamal@kamaldshah.com. Let us discuss this offline.