When my best friends from Engineering College and I said our goodbyes at the end of four years of being together and having loads of fun, we made a pact that we would meet after 10 years at our college at 10 a.m. on Jan 1st! That never happened though! Two or three of us would manage to meet up but never all four of us. Finally, last year, after a whole 20 years, we met up and how! We did the cruise together.

Again this year, I sent them an email when my plan for Chicago was firmed up asking if we could meet at some place. Miami, Las Vegas and Hawaii were thrown up as possibilities. Finally, however, we zeroed in on Oceanside, a place about an hour and a half from Los Angeles.

We all reached LA between 9 and 10 on Friday night and met at the Baggage Claims area of LAX airport. From there we took the shuttle to the place where one of us had booked a rental car for the weekend. After a really long wait, we took the car - a cool, red Mustang convertible and headed out. After having dinner at a Denny's on the way, we reached the resort that we'd booked at around 2:30 a.m.! The suite was like a small apartment - with two bedrooms, two baths, a living room and a small kitchen! Our balcony overlooked the beach. 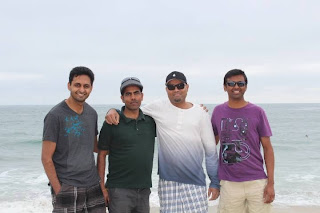 The next morning, we walked down to the town and had breakfast and then headed out to the beach. Dinesh was very keen on doing some boogieboarding. So after getting our feet wet (literally) we got some boards and tried this. Dinesh and Kamal (my namesake) were fairly good at it while Chetan and I struggled! We spent some more time in the water, swimming and generally playing the fool and then went back to the resort swimming pool followed by the jacuzzi.

After showering, we went to a Mexican restaurant for lunch. We then took the car and went for a drive around the area, packed some Indian food for dinner and then headed back to the resort. That evening was spent over dinner and drinks (I drank Coke!) discussing, as is usually the case in such meetings, a lot of philosophy, religion, college days, the girls in our college (when will you get over this, Dinesh???) and similar very important topics. 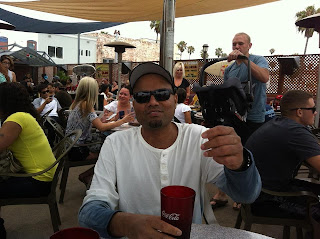 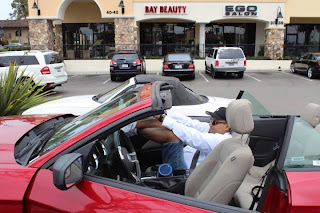 The next morning, we checked out of the resort and drive back towards LA and stopped by for lunch followed by a visit to Redondo Beach. This place had a huge marina where there are thousands of boats. We hired a boat and drove into the water and then did what we love to do, sang songs in the middle of the water. 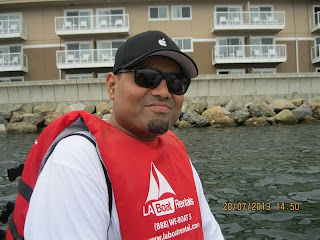 The next day, my brother Karan picked me up from the hotel in LA we were staying at and took me to a place called Urth Cafe where we had breakfast. My dialysis session was scheduled for 5:15 p.m. that day. I was a little jittery because I had got dialysis about 3 full days back! I had done a very good job of controlling my fluid intake but three days is three days! I called the center to check if they could take me in earlier. They called back saying they could take me immediately! Great! So I had my brother drop me off at the center.

The staff was really good at this center. They had me on very soon. I targetted to pull off only about 3.5 liters because when I was trying to pull off more (4.5 liters) the last couple of times, I was having really bad symptoms (my mouth started cramping badly in Chicago - and I was alone there!). And anyways, due to all the saline they would push in to control the Blood Pressure, the nett weight loss would only be about 3.5 kgs! So, I thought might as well aim for that without all the accompanying drama!

The session went off fairly well.

The next morning, I was headed for Denver. My flight was at 8:15 a.m. My brother said, we should be good if we left home around 6:45 a.m. That proved to be a miscalculation.

Email ThisBlogThis!Share to TwitterShare to FacebookShare to Pinterest
Labels: diary, friends, US trip