Last night, I was at my cousin's house. My extended family had gathered there in preparation for cousin Nishant's wedding. Someone mentioned that the exit polls predicted a BJP victory in the four states that went to vote for their assemblies recently. There was excitement all around. Someone switched on the television to watch Arnab Goswami analyse the poll of exit polls. There was cheering, laughing and unbridled joy on almost every face in the house.

All the excitement eventually and expectedly, led to next year's General Elections and discussions about who would win. The consensus all around was that Modi would win and win big-time! Never mind if the JD(U), the Biju Janata Dal, the Trinamool Congress and the National Conference, the four groups that supported the BJP the last time it formed the Government would not touch the BJP with a barge poll this time. But excitement and reason do not play well together, you see!

My family has always been unabashedly right wing. They now support Narendra Modi to the hilt. One of my uncles made a grand announcement that should Narendra Modi win the election, he would throw a big party for all!

I honestly believe that my uncle's money is safe, for now at least. I do not see how the BJP is going to be able to form the Government in 2014. Without support from the major allies barring the Shiv Sena, the Akali Dal and most probably the AIADMK, there is no way they are going to go anywhere close to the magic number of 272. 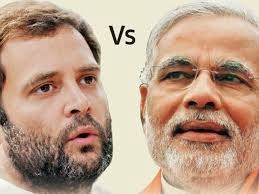 On the other hand, many of my friends (on Facebook at least) are strongly left wing. They abhor the Modi brand of politics, they can never forgive him for the Gujarat riots, they in fact hated the BJP even before the Modi phenomenon. During the last General Election, I decided to vote for the BJP and posted it on my FB wall. I was torn apart by my friends! I almost felt guilty for posting that! Even today, the minority among my friends who are Modi fans get a lot of flak for posting anything pro-Modi.

The trouble however is, what is the alternate to Modi? Rahul Gandhi? There is so much fun made of him and his speeches that anyone who has any online presence must surely be embarrassed to be supporting him.

After two terms in power, I would think it highly unlikely that the Congress would return to power. The large-scale corruption, the image of a meek, lame-duck Prime Minister and the lack of any tall leader who can inspire the people will work strongly against it.

This brings us to the worst part of the situation. The prospect of a third front Government led by someone like Mulayam Singh or Mayawati. This would be my worst nightmare come true. I might actually just decide to secede a la Arundhati Roy.

A week, they say is a long time in politics. We have 4-5 months to go before the next election. Let's hope things change and we do not have to feel embarrassed of our next Government.
at December 05, 2013