My nephrologist asked me to consult an orthopaedic doctor for the bone pain I've been having in my hip area. So, I went to one and he examined me and got an X-Ray done. After seeing that X ray, he asked me to get another X-Ray in a particular angle. This one was tough. The tech there made me lie in a very weird position! He tried thrice but could not get the desired results!

The orthopaedic doctor then said that there was some extra bone growth in my hip joint, something called a Cam impingement and this was causing the pain. He said we would need an MRI and referred me to a diagnostic centre where they did a good job with this particular type of MRI. He also showed my X-Ray to a colleague as if it was something very fascinating!

So, off I went to this diagnostic centre and got my MRI done. When I met the radiologist (who is one of the few in the city who do this type of MRIs well), he asked me to return in a couple of days and to bring any past X-Rays I might have. He then saw the X-Rays and stared at them, like forever! He kept rummaging through the different X-Ray scans I brought and stared at them with a deadpan look on his face. I was getting worried. What the hell was happening???

He then said he would like to do another MRI. I said ok and another MRI was done. He then said the second MRI did not give any additional information - apparently he was looking for something and he did not find it. He then repeated the staring endlessly at the X-Rays. I asked him if there was anything to worry? He said that there wasn't anything to worry but it was just interesting. He asked if he could keep one of the X-Rays! I said ok. He said the orthopaedic doctor would tell me what needed to be done.

Apparently, a similar X-Ray was done in 2009 and the changes were apparent even in that X-Ray. When I looked back in my prescriptions file (I file every prescription in a file), I did find a prescription from another orthopaedic doctor with notes of a similar pain at that time! The only thing prescribed was Dolo 650 mg (paracetamol).

I am going back to the orthopaedic doctor today. I wonder what's in store for me. I don't mind another few Dolos! I just hope it is nothing more than that. 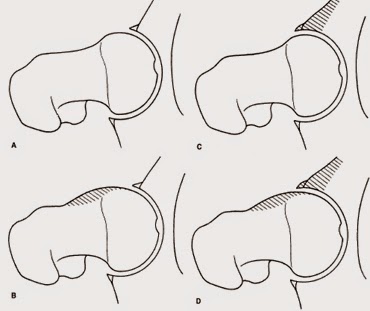 'A' is a normal joint. 'B' is a Cam impingement