Is the AAP Delhi victory going to usher in a new kind of politics in the country? 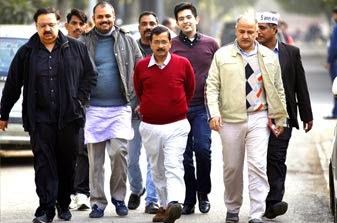 Never before in the history of an Indian election has such a decisive mandate been given by the electorate to any political party. The soon-to-be-installed Arvind Kejriwal Government will have practically no opposition in the Delhi assembly.

Many analysts express deep concern on how a party that tends not to shy away from acts that cause people to describe it as 'anarchist' would behave when there is no opposition. Recent signs however show that Kejriwal and his team have learnt their lessons. They seem to have mellowed down, become more mature and sensible.

How did they manage to get such a huge mandate?

Conspiracy theorists claim that the BJP intentionally lost this election. Well, if it really was so, they would never have unleashed PM Modi during the campaign. Why would they want to tarnish his reputation of winning elections? The truth is that the people really wanted an AAP Government.

Is this is a referendum on the Modi government? I highly doubt this. People these days differentiate between the Centre and the State. Its been under a year since the Modi government took over at the Centre. Its performance, despite the huge expectations has not been bad. I don't think people would swing from a 100% verdict for the BJP to an almost 100% verdict against the BJP in such a short span of time.

Now, coming to the larger issue - of the impact of this election on national politics. Unfortunately, I don't think we are going to see much change in the way politics is run in much of the rest of the country any time soon despite the AAP victory.

The reason for this is that the AAP would first focus completely on Delhi and make sure that the promises it had made, especially with regard to a clean, corruption-free administration are fulfilled. Any attempt to look at other states would take away the focus on this. AAP is a young party with a very poor organisation structure beyond Delhi. It would be foolhardy of them to expect similar successes elsewhere due to this major handicap.

Despite PM Modi's best intentions on the issue of corruption, the BJP is pulled down by the baggage it has carried for all these decades. There are just too many people who are from the 'old-school' who believe in the culture of entitlement that afflicts the traditional political class in this country. And this is why he will fail when it comes to providing an administration that is as clean as one that the AAP can provide.

About other parties in the country, the less said the better.
at February 13, 2015