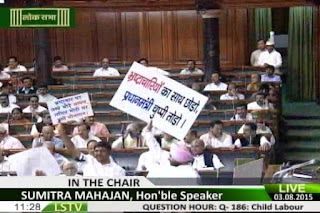 The recent Parliament session was a complete wash-out. Disruptions by the opposition, led by the Congress prevented important bills from being passed. Apart from the huge loss of money incurred by running the houses of Parliament without any business being transacted, there has been an incalculable loss in terms of opportunity by not passing important bills.

Who is really to blame?

The supporters of the BJP lay the blame squarely on the shoulders of the Gandhis who have such a pathological hate for Prime Minister Narendra Modi that they are loath to see him become successful in anything. The Congress, on the other hand says that they are not doing anything the BJP did not do when it was in the opposition. This is not entirely devoid of truth. Yes, of course, if they did something wrong, it does not mean you do it as well!

This cycle of disrupting Parliament needs a permanent solution.

Consider what Parliamentarians earn. Apart from a monthly salary and allowances of Rs. 1.3 lakh per month, they get a daily allowance of Rs. 2,000 to attend Parliament. All this is tax-free. Apart from this, "MPs can travel anywhere in the country by rail, first class, and get 34 free air tickets for themselves or a companion a year. Spouses of MPs can  travel free by air from their residence to New Delhi eight times a year when Parliament  is in session and unlimited number of times by rail."

What needs to be implemented strictly is a pro-rata system. Pay only for the work done. For example, if the official number of hours Parliament was supposed to function was x, of which due to various disruptions, it worked only for y, pay only y/x of all the above mentioned amounts. The important thing is that all the allowances, air tickets, household expenses etc. should all be paid pro-rata. Just doing this for the salary would hardly achieve anything.

As it is, most MPs are wealthy enough for this to make much of a difference. So, we need to be very stringent about these conditions.

We need to implement this quickly. The country has already lost a lot of money due to our inconsiderate and egoistic leaders.
politics