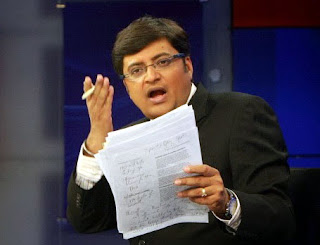 I saw the movie Talvar a few days back. The movie is based on the 2008 Noida double murder case. The case was covered extensively in the national media at that time. The Talwars, Aarushi's parents have been sentenced to life imprisonment in 2013. The film does not overtly take any sides but hints that the parents were innocent. The film highlights the way the investigation was botched up by the Noida police. It also suggests that the CBI team that finally fought the case in court that led to the conviction of the parents had a hidden agenda.

All this aside, at the time of the investigation, the media pronounced the parents guilty. The way the media trial was conducted, throwing all journalistic norms to the wind was appalling. Many news channels sensationalised the entire murder revealing sensitive details about the girls and her parents to a nation that had actually had nothing to do with it. It was not a case of national importance, after all.

The media in this country has become prosecution, judge and executioner, all rolled into one. Objective news coverage can rarely be found with news anchors routinely taking sides quite unabashedly.

The way that most ghoulish of news anchors, Arnab Goswami of Times Now conducts his debates is only to be seen to be believed. He asks a question to one of the participants and answers it as well. Many participants wonder why they have been called if they are not even given an opportunity to answer!

The answer to this is - professional ethics. Journalists take up this profession for the pleasure in bringing the truth to the people; at least that is what the original intent might have been. To then go about your job without adhering to its most basic tenets is highly objectionable.

Unfortunately we live in times where anything can be justified as ethical. Many doctors justify prescribing unnecessary procedures and investigations to the high fees paid to get their degrees. Many ministers justify corruption by citing the high cost of getting elected. Why fault news channels for distorting news to push up their advertising revenues?