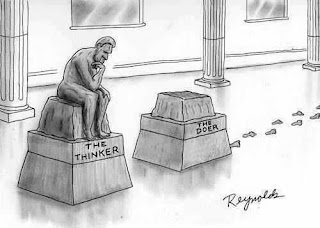 I find that in any group of people that comes together to take up some activity - a company, a project team, a non-profit organisation etc., there are broadly two groups of people - the thinkers and the doers. The thinkers are the ones with the ideas and the doers are those that implement them. Both are essential and equally important to the success of the group.

The thinkers come up with what should be done. They often will have some ideas on how they should be done. They will come up with a lot of really great stuff. A lot of it would be out-of-the-box. A lot of it could be described as visionary. They can think big. Almost revolutionary. But ask them to actually do any of those things and they would feel lost. They wouldn't know where to start. They would have absolutely no interest in doing anything.

The doers, on the other hand, are content well, doing stuff. They can't come up with the big ideas. They are great executioners. They know how to get things done. They are also ready to pull their socks up and get down to doing things themselves. They know their team (if they have one) and who's good at what. They often have a lot of respect for the thinkers and wonder why they can't come up with such great ideas!

The doers get frustrated when the work they're doing is not appreciated. They believe that the thinkers, who come up with all these ideas can't do anything themselves and all they can do is instruct.

The truth is that both the types of people are extremely critical for the success of any team. One without the other is a sure recipe for failure. It is important for both to realise this and appreciate the other.

Email ThisBlogThis!Share to TwitterShare to FacebookShare to Pinterest
Labels: work

Very true.. Nice funny touches of reality as well..
What's your opinion on Thinkers who are doers ?

They would be best Karthik. But there aren't many around! What I have seen is as you climb the ladder of hierarchy in an organisation, you become more of a thinker and less of a doer. It could also be the converse - if you are a good thinker, then you can climb the ladder.