Recently, doctors at Medanta Hospital, Gurgaon, including Medical Advisor to The Atypical HUS India Foundation, Dr. Sidharth Sethi were faced with a 12 year old boy that had the classic signs of Atypical HUS - hemolytic anemia, thrombocytopenia and uremia. Other conditions were ruled out and aggressive Plasmapheresis initiated. The boy stabilised and was discharged. A complement factor assay was normal.

The boy fortunately was an American citizen. Eculizumab was procured from Alexion Germany with co-ordination by the American Embassy. The cost of the drug was presumably covered by the boy's insurance company in the US. A complete genetic analysis was done in France which also did not identify any known genes implicated in aHUS. Subsequently, Eculizumab was withdrawn and the boy continues to do well. The entire sequence of events was recently published in the Indian Journal of Nephrology and an initial version can be found here.

The article states some important things: 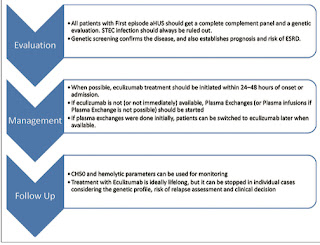