When it comes to a fistula, don't abandon what can be fixed 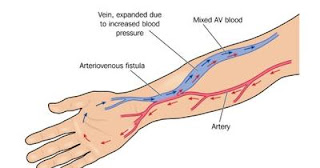 The human body has four sites in the body where an AV Fistula can be made which are comfortable. When we've exhausted all these options, then other options can be explored but these are not comfortable for a patient to get dialysis. The initial four I talked about are in the two hands (two each). Then if and when you run out of these, options in other parts of the body such as the legs can be explored. I have even seen a picture of a woman having a fistula on her stomach.

When you have such limited options, it is important that the initial four sites be preserved as much as possible. In India, unfortunately, I see a lot of fistula sites being abandoned at the hint of the slightest problem. This is due to the lack of experienced and proficient vascular surgeons.

In developed countries, everything possible is usually done to repair a fistula that is giving problems. In India however, the trend is to abandon the site and create a new fistula. In the past, dialysis patients were not expected to live too long. So, the thinking probably was, that anyway by the time the patients would exhaust his fistula site options he or she may not be alive. However, these days, increasingly, survival rates are higher and you find a lot of patients living longer lives on dialysis.

This makes it all the more important for our mindsets to change.

I was sent a link by two people yesterday which prompted me to write this post. The article talks about saving a fistula that is giving problems rather than abandoning it. The article mentions this facility being available in Medanta Hospital in Gurgaon. I am sure other good vascular surgeons in other cities would also have similar expertise. It is important that such centres are set up and the overarching intent should be to preserve fistula sites wherever possible.
at April 13, 2016

Hi kamal...in my friends husband's case the reasons for failed fistula....loss of thrill and narrowing of the blood vessels... They told her they may have to keep a stunt..which will cost. 50000. So now they have done the fistula ...in the other hand....but till that is ready he is getting dialized...through an access point in the neck.

Last Wednesday I was ordered button hole needle at coimbatore centre. I don't have that much of knowledge about BH. I accepted and going all the four hour dialysis, whenever sitting and laying again sitting, I have no feel paint, or any alarm from the machine.At the time of puncturing I have no pain. I am a CKD 5 patient since 2007.I don't know the advantage and disadvantage about the needle. I hope that you might have enough knowledge in this. I request you to please share the safety and other things. My E-mail ID is rksreedhan@gmail.com thank-you sir

Buttonhole needles are associated with very little pain. The chances of cross punctures and aneurysms reduces dramatically with these needles. However, there is a slightly increased risk of infection at the cannulation site. I have been using buttonhole needles for the last 10 years or so. I really like this method.