on November 16, 2016
It's been a long time since I blogged! I have been having pain in my left knee from about a month now. It gradually increased over time and about a week back, it became really bad. I could barely walk and when I did, I was in a lot of pain. The pain is worst when I sit for a while and get up and then reduces if I stand for a little while.

I consulted an orthopedician who got some X Rays and then an MRI and said I have some inflammation in that area and some fluid has accumulated and formed what is known, rather colorfully, as a Baker's cyst. When I first heard the term I wondered whether it was related to something that formed in bread when it was baked! Wikipedia put it down, disappointingly, to the cyst that was named after the doctor who discovered it and went by the last name Baker! 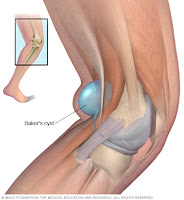 I was asked to take an NSAID called Indomethacin. Now, usually NSAID are prohibited in people with kidney disease because they can harm kidney function. But since my kidney function is already at 0, they were okay with me taking it because there was no lower the kidney function could go. Talk about a silver lining!

The drug has made it possible for me to walk, although with a slight limp. The pain has reduced significantly. However, I still have moments, especially when I get up after sitting for a while, when the pain is bad and I need to stand for a minute or so before attempting to walk.

In the recent past, I have had inflammation quite a lot. It was in my wrist at first and the same drug would relieve the symptoms in three days. Now, it's the knee. I wonder why I am so inflamed! I had read that dialysis is a very inflammatory process. So, it must be the long term dialysis.

I do hope I get better in time for my holiday this weekend! So looking forward to it!