Let’s not force people to wear patriotism on their sleeve 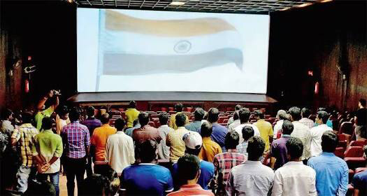 In an outstanding example of judicial overreach, the honourable Supreme Court passed a judgement a few months back that the national anthem must be played at the beginning of screening in all movie halls. Ever since then, during our Sunday evening picture routine, my parents and I have been standing for the national anthem. Just when we would have settled down in our seats with pop corn and a cool drink, suddenly the screen would say, “Please stand for the national anthem.” My father, forever the willing patriot would happily stand up, my mother would also stand up, not with that much enthusiasm and I would have a tough time getting up from the seat due to my knee problem with a curse muttered under my breath to the honourable Supreme Court.
When you force someone to do something, they develop an aversion to it. Why do we need such symbolic gestures to display our patriotism? Why do we need these forced shows of proving our love for the motherland?
Thankfully, the honourable Supreme Court looks like it is going to reverse that decision. In remarks made a couple of days back, it questioned the concept and said that the words “national anthem should be played” could be changed to “national anthem may be played”.
I so wish that the time spent by the honourable court on this silly, trivial issue could have been spent in dealing with the thousands of more serious cases pending before it.
politics