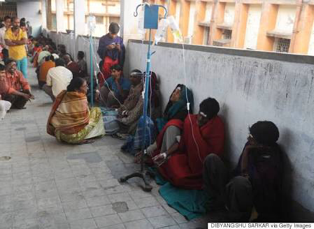 I often envy countries that have public funding or a mature healthcare system that takes care of expensive drugs such as Eculizumab that is the only known approved treatment for my disease Atypical HUS. I often wish that my country too had a healthcare policy that could provide this drug to me.
India’s public health spend is a little over 1% of GDP. This is way below the world average of about 7%. The National Health Policy 2017 has targeted to increase this to 2.5% of GDP.
Yes, this is low as well but we must remember that India is a severely resource-constrained country and we need to spend every rupee after a lot of thought. There are several basic areas where India lags behind world averages when it comes to healthcare statistics such as Maternal Mortality Rate and Infant Mortality (which, thankfully are getting better, see here and here). When many Indians do not have access to basic healthcare, should the government spend on expensive things like the drug Eculizumab? Many times, questions are also raised on maintenance therapies like dialysis.
I have had several discussions with people on this subject. I have usually taken the line that the government should spend on dialysis along with other aspects of healthcare like the ones mentioned above.
The overarching theme of any such decision would usually be the number of lives being saved or affected. Kidney disease affects about 10% of the world’s population and about 1% require dialysis or are on a transplant. aHUS affects 2-3 per million population. With such small numbers, do such therapies really merit funding by the government? The US Government spends about 7% of its Medicare budget on dialysis which accounts for less half a percent of its population. We, in India, some would argue would be better off spending this money on primary healthcare rather than maintenance therapies that are often life-long with poor outcomes.
Unfortunately, healthcare policy has to be driven by the number of lives affected. There just is no other reasonable way. Would you rather spend crores of rupees to save one life or use that money to save hundreds of lives? That is the unfortunate truth today for India. India cannot afford to spend on secondary and tertiary healthcare when the primary healythcare system itself is in shambles.
This means that I will probably have to just wait in the hope that another cheaper drug comes out to treat my condition and becomes available in India. This means I will not be able to get a kidney transplant any time soon. This is a little difficult to digest as I see so many people around me getting a kidney transplant and not needing dialysis any more. But, at the end of the day, it is what it is.
at January 13, 2018

Hi Kamal, how much is this drug cost?

A couple of crore rupees per year. Lifelong.

Ok. You are talking then about 100s of thousands of dollars everywhere. Is that supported even in countries like USA ? There are usually caps when it goes that far.