I have been wanting to travel for some time now. I hadn’t visited many of our newer centres. So, when Daxesh Patel from our Gujarat centres pinged me one afternoon at work saying I should visit for the launch of the Gujarat centres, I decided that I would attend the events. There were two launches scheduled, one each in Surat and Vadodara, both set up inside the reputed Sunshine Global Hospitals.

Clean and Green Surat
I landed in Surat on a wet afternoon and took a cab to the hotel. After freshening up, I left for the centre which was situated on Dumas Road, right next to the International Business Centre. One thing that struck me as the cab took me to Sunshine Global Hospitals was that the city was very clean and modern. Tall buildings amidst green lands, most of the main roads had tracks for cycling and pedestrians which made commuting very pleasant. I wasn’t too sure if this was the case with the less prominent roads.
One thing was for sure - Surat had come a long way from the days of the plague.
As I got out of the lift, I saw a couple of girls wearing the NephroPlus green coloured uniform making a colourful rangoli of the two logos - NephroPlus and Sunshine Global. I was impressed with their enthusiasm. I went into the centre and met the team and the guests on dialysis. The centre was doing an excellent job and the guests all seemed very happy with the team and the facilities. I had dinner with the team at a restaurant close by. 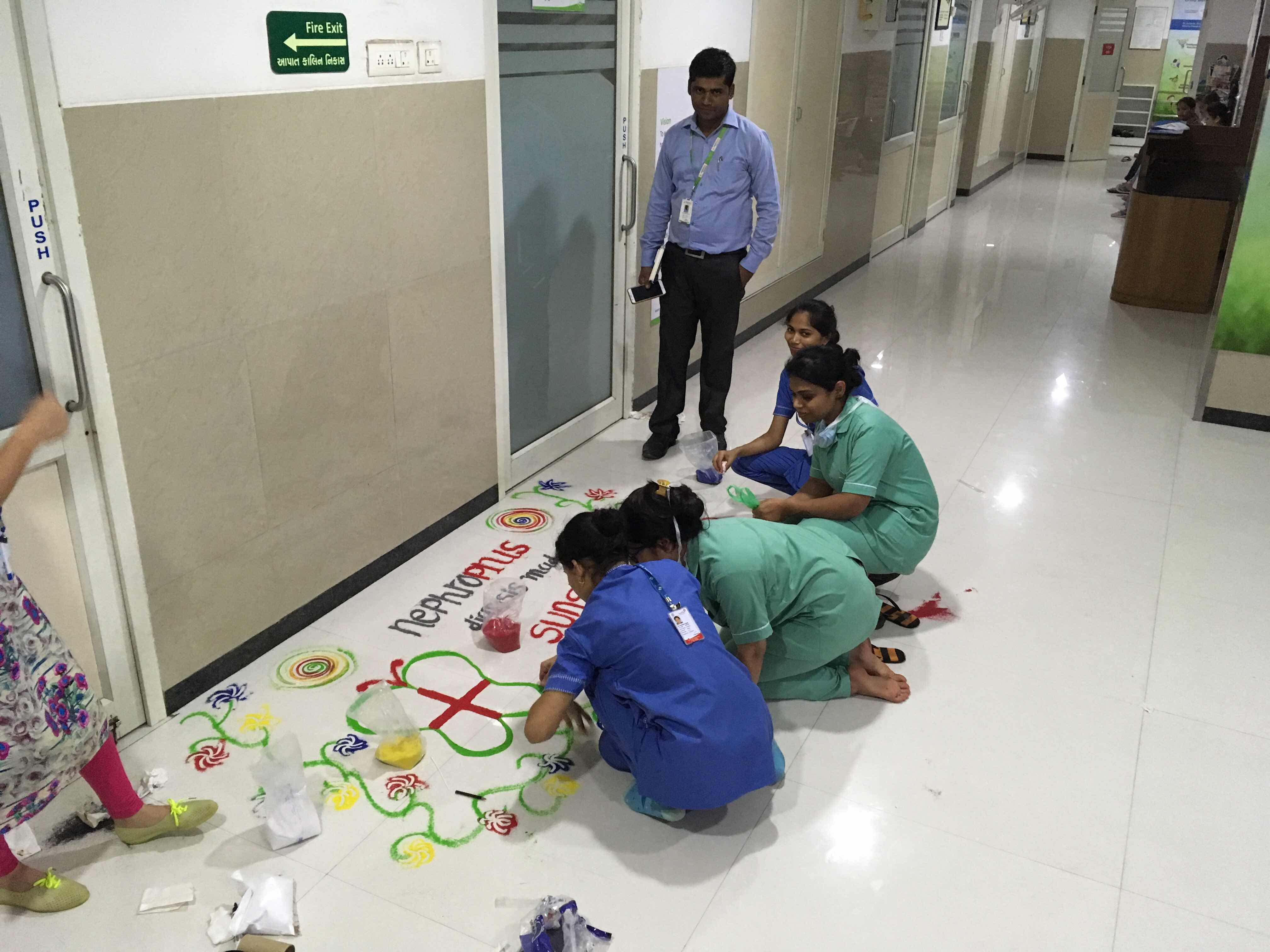 Team mates doing the rangoli the evening before the inauguration
“Surat nu jaman ane Kashi nu maran”
That’s a traditional Gujarati saying that means “Eat in Surat and die in Kashi”. Presumably, these are the two ultimate things in life. I had heard a lot about the Undhiyu and the Ponkh of Surat and wanted to definitely try them during the trip. Unfortunately, many frantic phone calls to the famous restaurants and joints revealed that both these delicacies are available only in the winter. So I had to settle for the lesser pleasures in the culinary landscape of Surat.
On the morning of the launch, I took a cab to Jani Locho and Khaman House at Adajania Gam and ordered a plate of Locho. It was a soft, steamed dish with the consistency of upma but the taste that reminded me of Khaman Dhokla. It was topped generously with butter and sev and served with a sheet green chutney. I loved every bite. 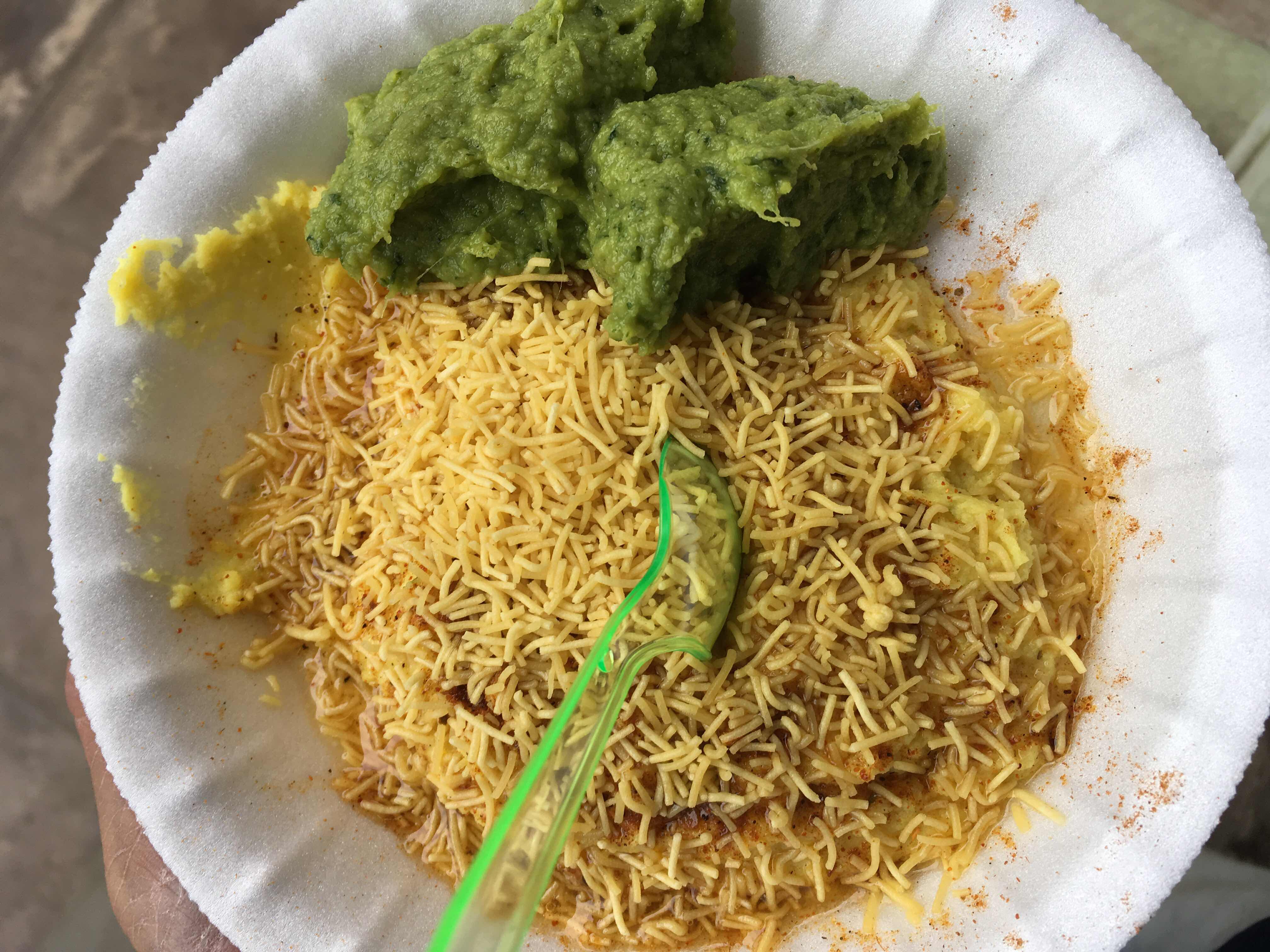 Surti Locho
Once I was done, I wanted to have the famous Jalebi and Fafda. I was directed next door to the Jani Farsan House and they packed up some Jalebis, Fafda, Kadhi and some sautéed and salted chillies. I took this packet and headed back to the hotel where I enjoyed the whole combination. Kadhi with the Fafda is something I have seen only in Gujarat. Jalebi and Fafda is also available in Hyderabad but no one serves it with Kadhi. 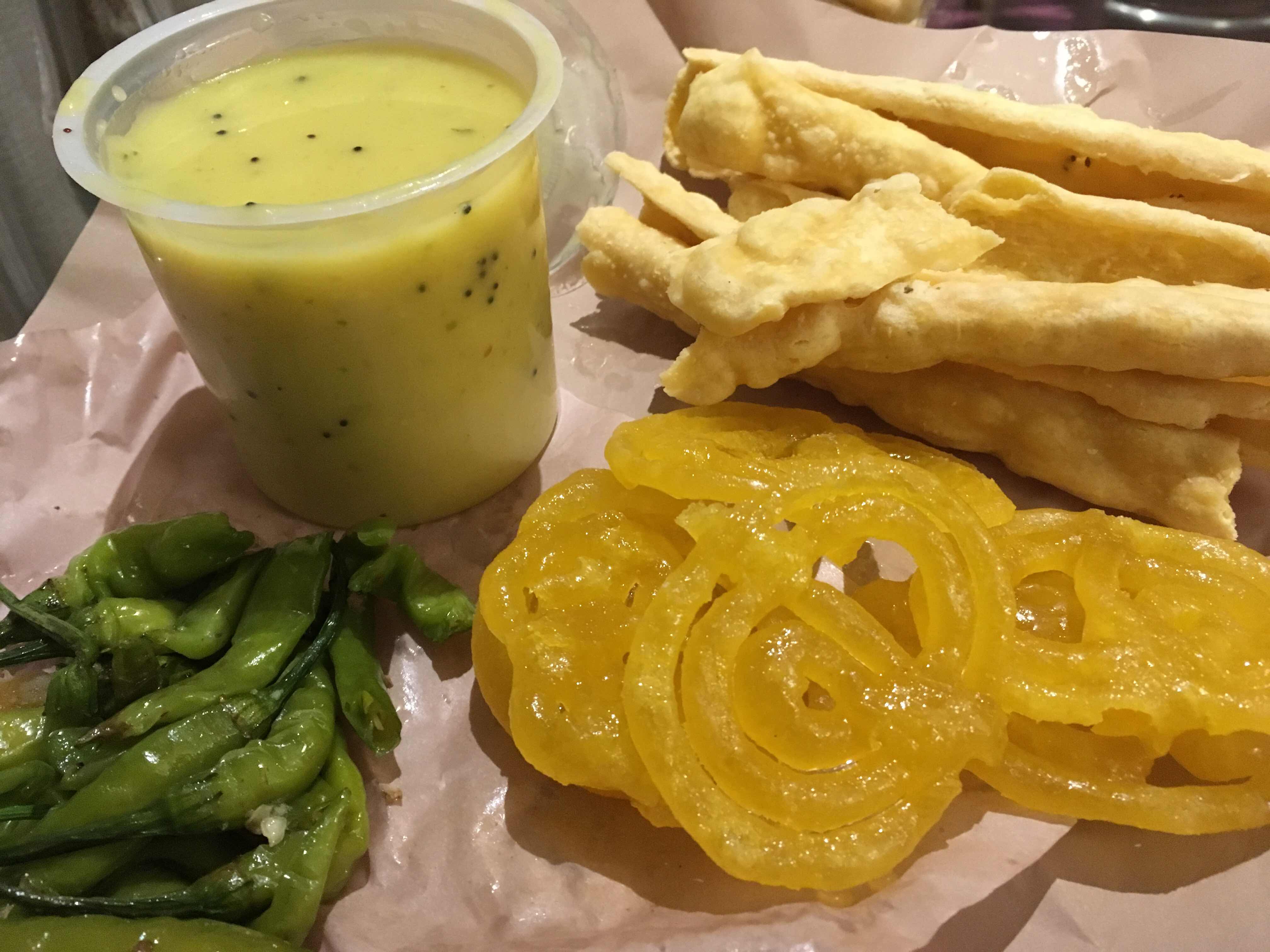 Jalebi, Fafda, Marcha and Kadhi
The launch went off very well. It was however time for lunch and I was starving. I took a couple of my colleagues and headed out to a place called Kansar at Nanpura which served the Gujarati Thali. This was very similar to the Rajdhani Thali I was used to in Hyderabad but there were two sweets which were really excellent - the Fruit Shrikhand and the Khajur and Anjeer Vedhmi. I did not have much of the regular phulka, dal, kadhi and vegetables but helped myself generously to these two sweets. 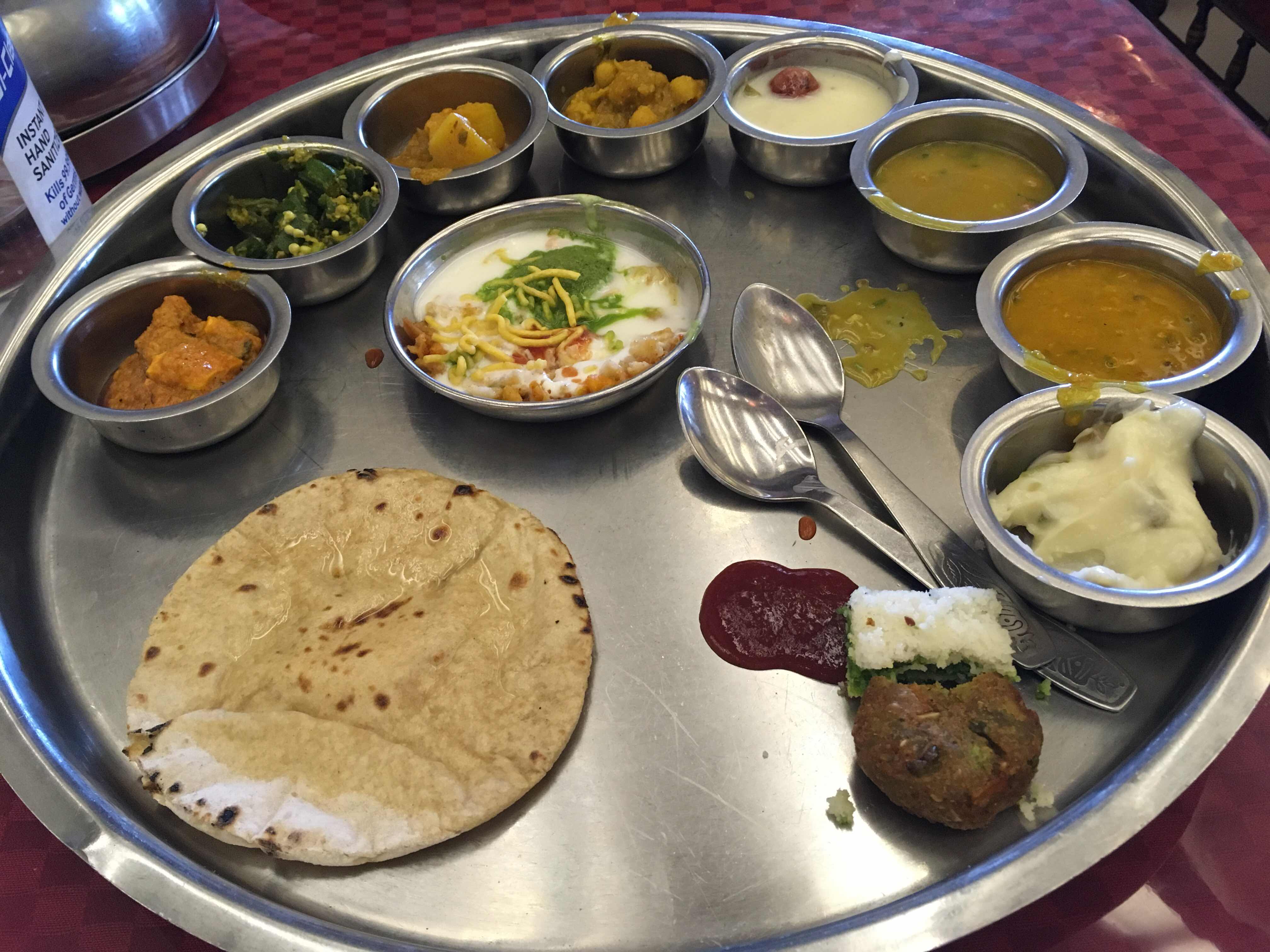 The Gujarati Thali at Kansar 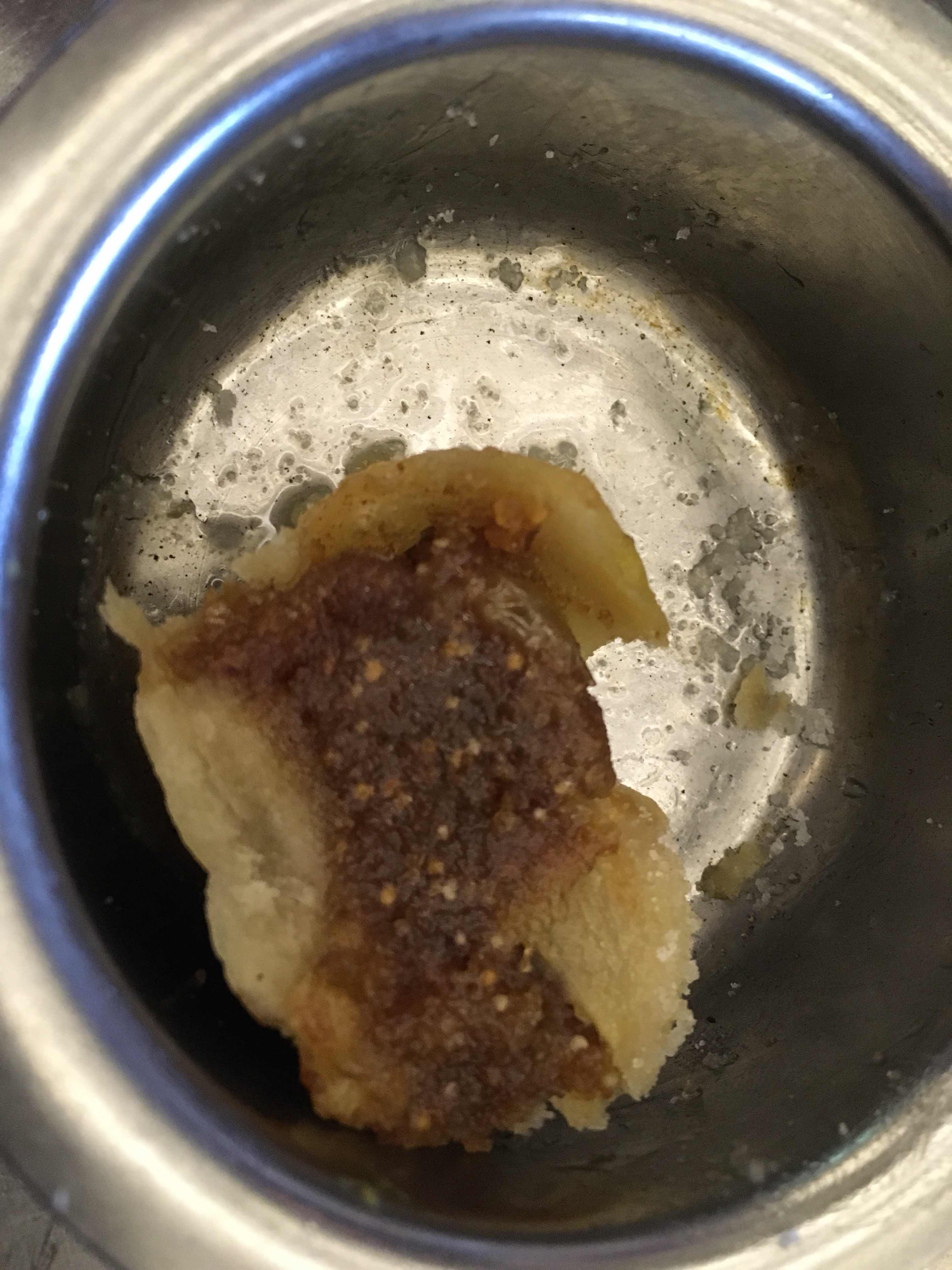 Khajur Anjeer Vedhmi
Train Ride to Vadodara
I took a Double Decker Air Conditioned Chair Car Train from Surat to Vadodara. It was a very pleasant experience. Sitting on the window seat of a train that passes through the interiors of almost any state in India can be an enriching experience. I saw blankets on the earth of different shades of green one after the other interrupted by a lone tree once in a while. This was a welcome change from the landscape of the cities.
We reached by 7:30 in the evening. I checked in to my hotel and headed straight for Mohanthal, another thali place in Vadodara situated at Vadi Wadi. There I met our team from the existing Vadodara centre at Raopura inside Shreenath Clinic. This was a bunch of highly dedicated and very capable dialysis technicians. I also met with our Medical Director for this centre, Dr. Kamlesh Parikh and his wife, Dr. Dipti Parikh. After a very engaging conversation on a variety of issues ranging from how NephroPlus was born to the government’s healthcare policy to whom Gujarat was going to vote for in the next election, we drove down to Paras Pan Shop where we got to see things like Smoke Ice Pan and Fire Pan. Dr. Parikh and my colleagues Vinit and Daxesh tried the Smoke Ice pan which had plumes of smoke gushing out from their noses once they put the pan in their mouths.
The Real Heroes of the NephroPlus Story
The inauguration of the centre was done the next morning by the Guru of the hospital owner, Dr. Bhikubhai Mehta. We had a press conference after that. I spent some time with the centre team after that and again with the team at the Raopura centre. 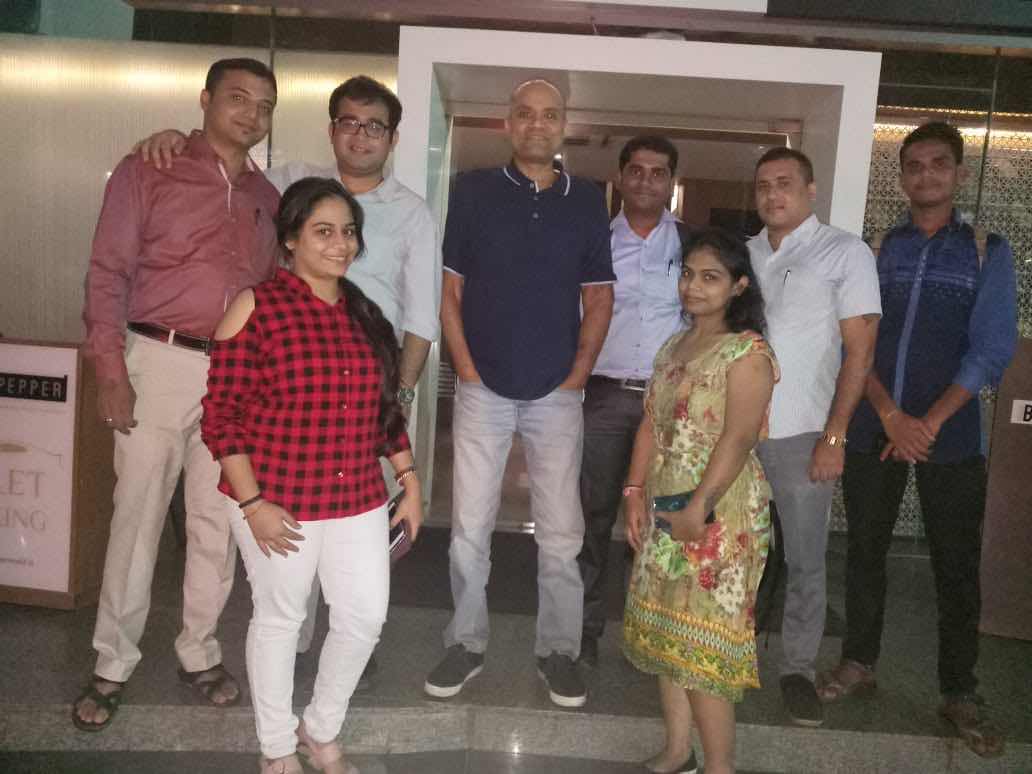 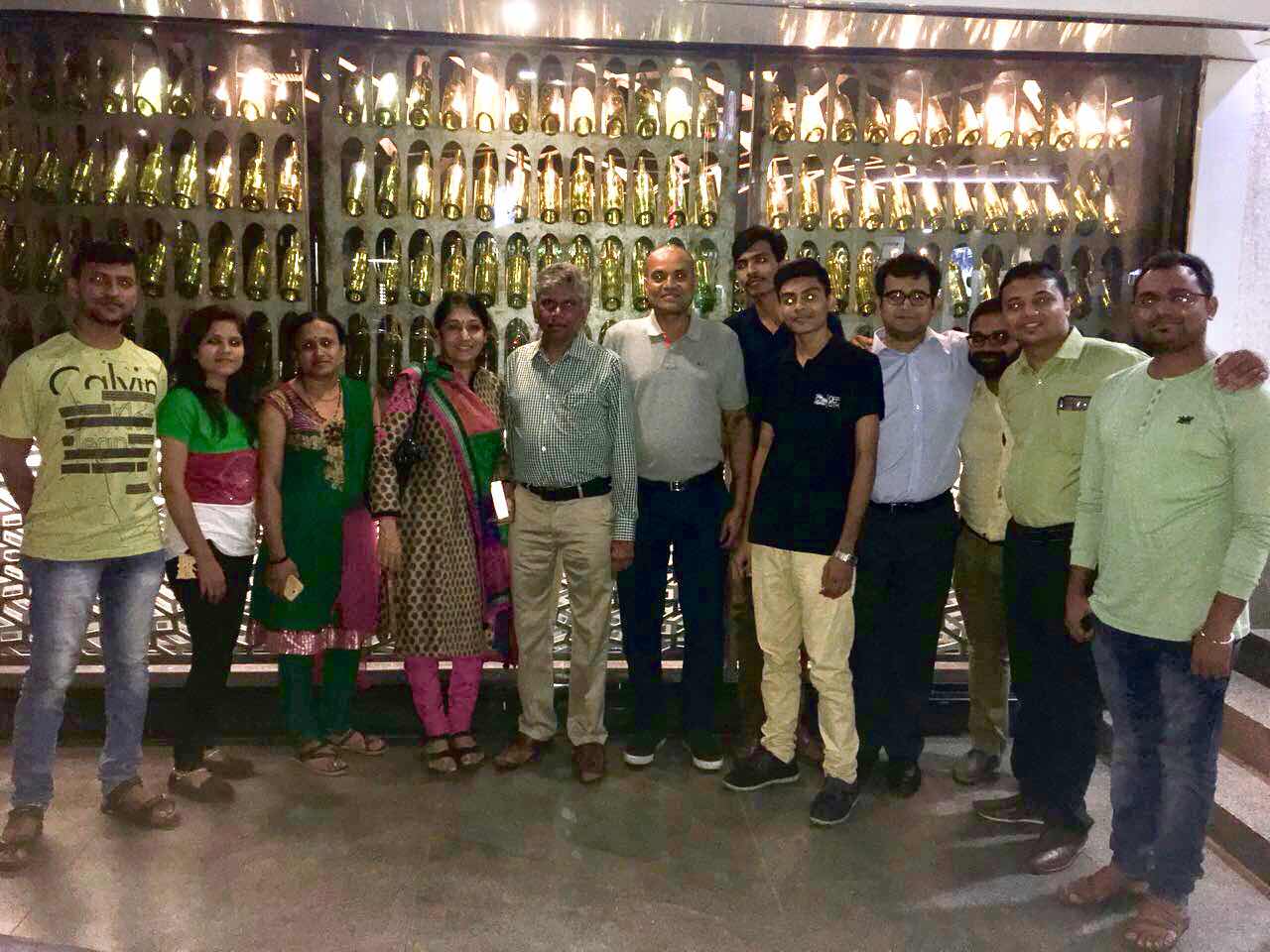 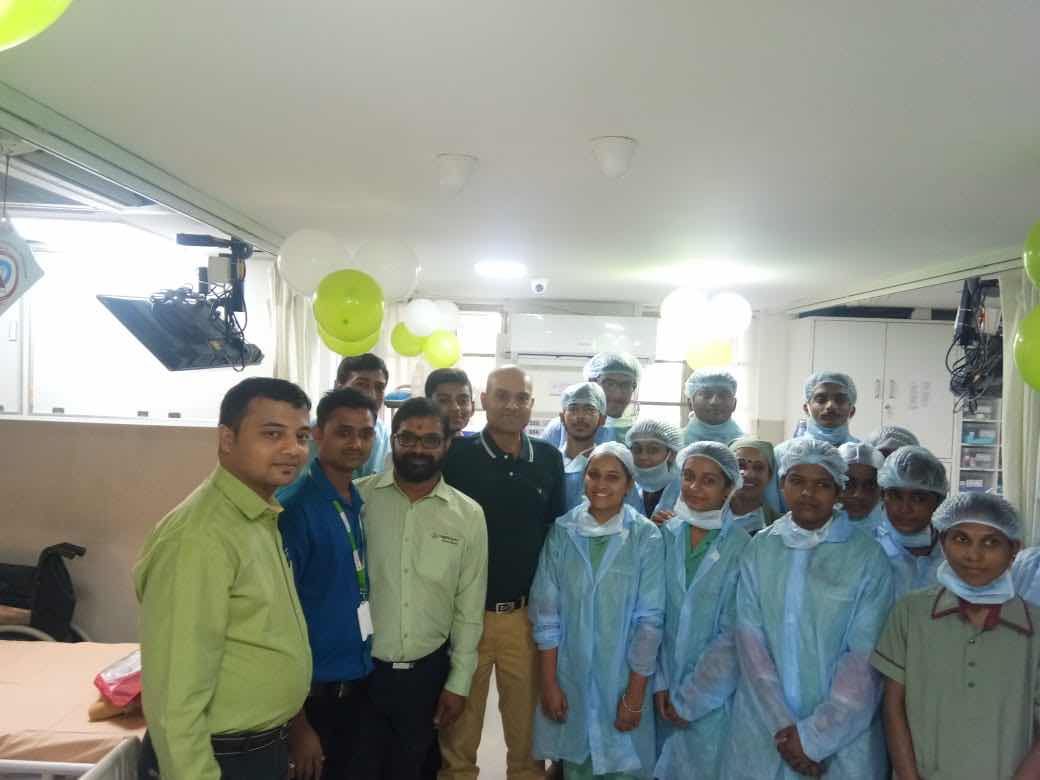 NephroPlus Manjalpur, Vadodara Team (in Sunshine Global Hospital)
I was amazed at the dedication and the simplicity of the teams. These people (and all our centre teams) are the real heroes in the NephroPlus story honestly. Genuine change is being brought to lives by these nameless and faceless clinical teams who toil day after day, taking care of our guests and changing their lives. Their names don’t appear in newspapers. No stories are written about them. Yet, they develop such strong bonds with our guests that they make the dialysis centre a second home. They serve selflessly, incessantly, even if there is massive rain or a general strike. We have seen many examples where our teams have risen way above the call of duty and done more than what their job demanded of them.
When I meet our centre teams, see the genuine warmth towards our guests and think of the impact these people are making and how they are achieving the vision of the company, my eyes usually swell up. I don’t need to worry about what is happening in the centre. I can sleep in peace.
Thanks so much, dear team mates!
at July 27, 2018