on October 12, 2018
It had been a long time since we had done a full-fledged Aashayein event. The last one I think was in Delhi in 2015. Now that we have a sizeable presence in the East, the Head of Operations of the East Zone, Alok decided to hold an Aashayein event in Kolkata. So, on the Saturday that just went by, I was on a morning flight to Kolkata.
Two Kolkatas
Like many other cities, Kolkata also has an old city that gets much less love from the government than the newer part of the city. So, while you have places like Barasat which is abundant in filth and grime, you also have Salt Lake and Rajarhat which are sparkling clean and green. The old city has narrow lanes with dilapidated buildings while the new city has wide roads with landscaped medians and fancy buildings with all the fancy companies occupying them.
Mishti Doi
Mishti Doi is a long time favourite from Kolkata. Literally translated to Sweet Curd, it is a simple preparation made out of caramelised sugar and thick curd. We stopped at a sweet shop that sold traditional Bengali sweets. I asked for a serving of Mishti Doi. It tasted more natural than the stuff I had tasted earlier. I also had some Sandesh which is another traditional Bengali sweet. The beauty about many Bengali sweets is that they are really very simple. Not too many flavours to overwhelm you, the base ingredient is usually milk or a derivative. Sandesh
Street Food
Kolkata is famous for its street food. I looked up the internet for recommendations. There were a couple of good joints close to where I stayed. I decided to walk down to them. One thing I realised a few years back is that you get a flavour of a place only when you walk on its streets. Often, I am used to a very protected environment - commute in cabs, be surrounded by people who know me and so on. As I walked down the street towards the Shatrughan Sah Muriwala (apparently this place had won an award for the Best Kolkata Street Food), I took in the sights and air of the city. This felt good.
I almost missed the joint. It wasn’t a permanent shop. There wasn’t even a board. I asked someone for directions and was pointed towards a small table with a middle-aged moustached man behind it. I leaned over and asked him if he indeed was Shatrughan Sah Muriwala? He nodded and pointed to a framed certificate which he had hung on a nail on the wall behind him. The certificate did say that this was the same guy. I ordered myself a serving of Jhal Muri. He made one in less than a minute and handed me the paper packet with the Muri. It was crisp, tangy, flavourful. The main flavour of the Muri comes from the mustard oil which has a peculiar taste. I loved the Muri.
I then went to a counter about 20 feet away where another man was making Chilla (a dish similar to a Dosa but made out of green gram). I ordered one. I debated whether to ask for it without the chutney or to lower my guard. My tongue won the battle while my mind protested. The Chilla was very good. The spicy chutney added to the flavour. I was just hoping they had used clean water to make it. But the deed was done. 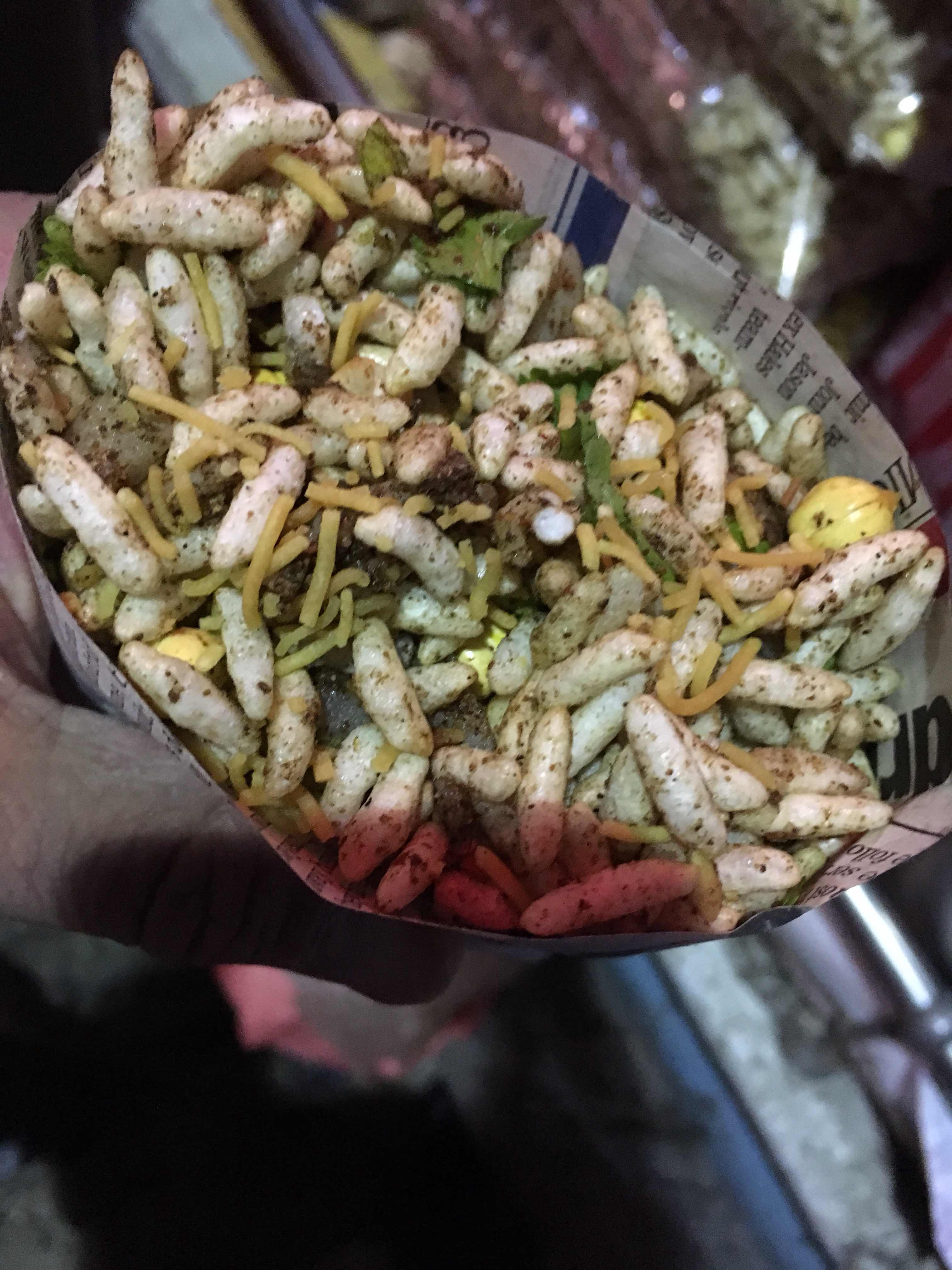 Chilla
The iconic Flury’s
To me, this Kolkata trip evoked memories of the beautiful film, Parineeta which was based in the city. Based in the past, the movie has its characters going to Flury’s for a treat. I learnt that Flury’s was just down the street from where I was staying. ‘Flury’s to banta hai!’ The place was very well done. I ordered myself a Red Velvet pastry and a Chocolate Mousse, the two eggless items on the dessert menu. Both were very good. For some reason, the song from the movie, ‘Kaisi Paheli Zindagani’ kept coming to me. 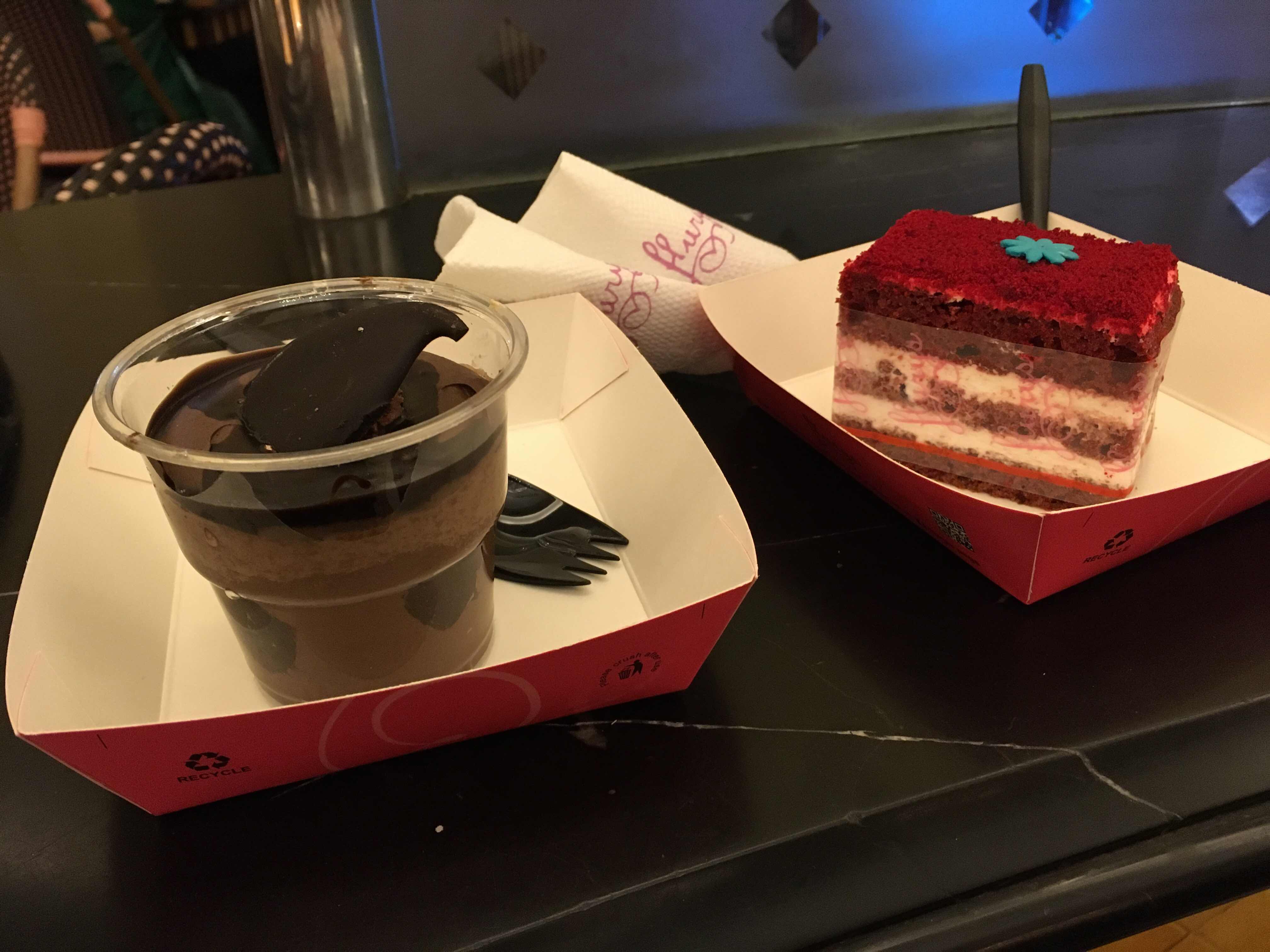 Dessert at Flury’s
As I left the place, I began wondering how my stomach would react to the dinner I had that evening. The event was the next day and I had gone and eaten what was possibly the riskiest meal I had had in the past several years. I asked for directions to a medical shop and stocked up on some medication. Just in case.
Centre visits
We have two centres in Kolkata city. One is in Barasat in Mega City Nursing Home and the other is in Prannath Pandit Street in Health Point Hospital. I spent time with the teams and pepped them up for the event the next day. Visiting our centres is always a pleasure. I get to see first hand the impact our teams are having on the guests we serve every day.
I was amazed with the response of one of the guests who said that a few months back, he used to be brought in a stretcher and carried onto the dialysis bed. The quality of dialysis was so good that he is now full of energy and comes and goes on his bike independently. That felt so good to hear. When I hear such stories and see the dedication of the ground teams, I feel that all the effort put in on a daily basis, the struggle against the inefficient and resource-starved healthcare system in our country, the challenges of managing a network that is growing in leaps and bounds with every passing month is all worth it. With the two centre teams
Aashayein - Let’s Celebrate Life
Almost 200 people attended the Aashayein event. People loved the event. One of the doctors who spoke at the event said that was the first time he was addressing a gathering of patients. There was a talk by a nephrologist on some tips to lead a normal life despite being on dialysis. There was a talk by a Dietician on how to make food interesting. There was a Best Fistula Contest judged by a Vascular Surgeon who went on to talk about how to take good care of your fistula. I spoke about the important of work and exercise on dialysis. We had a lot of games and entertainment as well. Those on dialysis could also take part in a talent competition.
The overarching theme of the event was that people on dialysis can lead normal lives. It was aimed to get them and others to believe in this and discard misconceptions about restrictions on things you can do while on dialysis. The feedback was very positive.
One important aspect of this event was the chance to meet other people on dialysis in an informal, cheerful setting. Merely seeing other people going through similar issues like you do can be reassuring. Towards the end of the event, I recited a satirical Hindi poem I had written about a fictional character called Sharma ji who was on dialysis. These lines resonated with several people who attended:
Paani to maap kar hi piya,
Pata nahi 5 kilo kaise badh gaya! 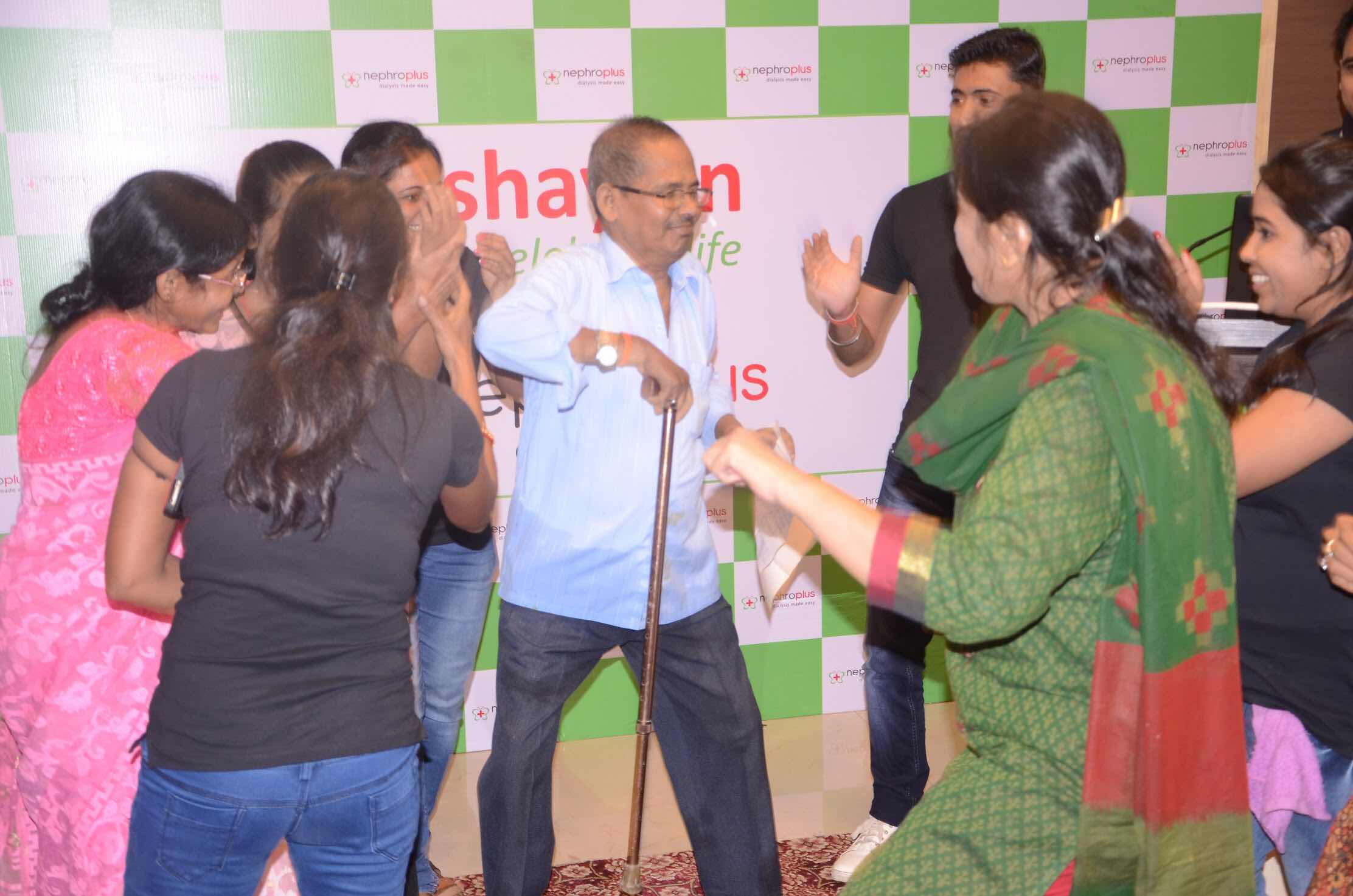 Punita said…
A wonderful description of Kolkata visit and the event... It is heartening to know that Nephroplus is steadily making a difference in the lives of dialysis patients.
October 21, 2018 at 7:13 PM