on May 06, 2020
As about two-thirds of the world is under various forms of lockdown and various governments are mulling a safe exit strategy, I have had a very different life for the past month and a half. While work did keep me busy full time, the rest of my time was spent very differently. I did get more exercise than usual and could up my meditation practice as well.

Our company is operating as usual for the most part. With most of our centres running as usual - some more loaded than usual - everyone is on their toes, at least figuratively. We use video conferencing solutions to keep in touch with each other.

My 65-year old mother who freelances for an insurance company gets a huge kick out of saying, "I have a Zoom call at 11:30 today." It makes her feel cool.

People say the way we work is never going to be the same again. While that might be true in the short run, I don't think this is a permanent phenomenon. Once the vaccine is out, even if after eighteen months, everything will be back to normal. Until the next pandemic at least. Especially in India where internet connections are flaky at best, long term working from home is not going to be an option.

Until then we will all enjoy incidents such as this:

One major inconvenience for Indians is having to do the cooking and cleaning in the absence of maids. As the lockdown prohibits people from venturing out of their homes, unless you have a live-in maid, you are left to fend for yourself. Ironically, when news of the impending lifting of some of the restrictions was announced, many television channels carried the news that domestic helps were now going to be allowed, as if this was a matter of national importance. The WhatsApp groups in our residential society had several animated discussions about whether we should allow maids or not.

Our home is fairly egalitarian that way. While my mother does most of the cooking and the dishes (my brother and I chip in regularly), my father operates the washing machine and the vacuum cleaner every alternate day. My mother insists on using the old-fashioned broom on other days followed by a thorough mopping.

I get away with just change my bedsheets and vacuuming my room every day. Having a GFR of 0 does have its advantages.

Families who rarely bonded and friends who have not met for years are now finally making time for connecting with each other. This is a very good thing. I have had a lot of fun hanging out with my cousins and college friends. Saturday nights is usually when these calls happen. During some of these calls, we play a game online like Pictionary as well. I believe there are special online versions for some games.

The dynamic in these calls is very interesting to watch. While some calls have a lot of activity where everyone is speaking over the other - and this is especially true when there is a game of some kind being played, on other calls there are brief bursts of conversation followed by bouts of uncomfortable silence where everyone is wondering what the hell is happening.

Whatever be the case, re-connecting with family and friends is probably one of the biggest positives to come out of this crisis. 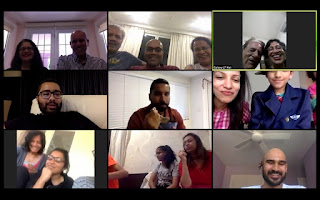 One of the family Zoom calls

I have been able to spend more time on sourdough since the lockdown began. While I could indulge this hobby only occasionally earlier, these days I have been trying things almost every weekend. I experimented with sourdough pizza last weekend. It turned out really nice though it required quite a lot of effort. I also made ratatouille one day. 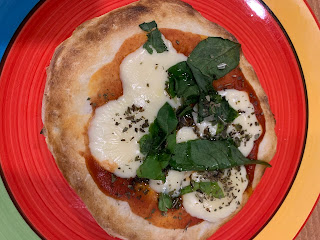 My brother, who happens to be a natural chef, has been delighting us time and again with some really fancy stuff. He whips up an exotic salad with hardly any thought and makes Pav Bhaji and Rajma without any readymade masalas.

To be honest, my parents and I have more than once considered firing our cook.

The world will never be the same again

I got a beautiful video from a cousin that talked about the irony of the situation where the inhabitants of Planet Earth needed a deadly virus to remind themselves that life is meant to be lived very differently from what they had become used to. Check this out: