on March 13, 2021
Personal Backstory
I have had my AV Fistula for about the last fifteen years now. Dr. P. C. Gupta, one of the best Vascular Surgeons in the country, created it. What was supposed to be an hour long procedure, went on for over two-and-a-half hours. They had done the anastomosis joining the artery and the vein when they realised that the vein upstream was blocked. Dr. Gupta then did a Basilic Vein Transposition where he took a fragment of vein elsewhere from the arm and connected it to the fistula vein.
The fistula created many years ago has served me well. There have been a few infections due to buttonholing, only one of them major. Of late though, a stenosis or a narrowing of a segment of the vein has formed near my clavicle in the left shoulder. An aneurysm (an increase in the vein's size) had formed near the anastomosis. People have subjected me to several bouts of uncomfortable stares.
My nephrologist advised me to see the Vascular Surgeon every six months to ensure that the fistula is working well, and the aneurysm formed because of the stenosis is under control. I religiously followed his advice. During one such visit, Dr. Gupta suggested I got a venogram to check exactly what was happening inside. He also said that if the stenosis was significant, they would also put in a balloon and open it up.
The procedure itself
So I went over fasting on the designated date and a team of Interventional Radiologists worked on me in the Operation Theatre. They first gave me a local anesthetic in my upper arm. They made a small incision and inserted a small tube through it. They pushed the tube all the way till the suspected stenosis and injected some contrast dye and projected the images on the screen. There it was - the stenosis was significant. They had a deflated balloon attached to the tip of the tube, and they could inflate this from outside. So they inflated it and opened up the narrowing vein. The entire procedure was fairly comfortable apart from the point when they inflate the balloon, which caused some pain. They gave me a mild sedative which reduced the pain. 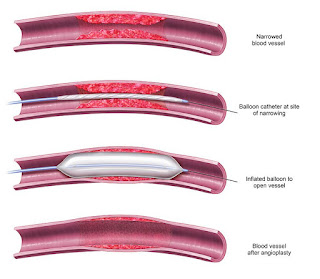 I have undergone this procedure twice more after that. One was about a year after the first time and the second was about seven months after the second time, a couple of days ago.
A Venogram + Venoplasty (also called Angiogram + Angioplasty or Fistulagram + Fistulaplasty) is now becoming a standard of care for the maintenance of AV Fistulas. It has become a routine Outpatient Procedure.
So when does one know they need this procedure?
The most common sign that you may need it is an increase in the Venous Pressure during your Hemodialysis. The Venous Pressure is the pressure exerted by your access against the flow of the blood back to the body through the venous needle. The HD machine measures it and displays it. This pressure should always be significantly lower than the Blood Flow Rate. For example, if your Blood Flow Rate is 300 ml/min, your Venous Pressure should be at most 250. Anything more than this is a sign of trouble. These numbers are obviously only indicative, and each individual is different.
What if I don't do it?
If not corrected, there is a risk of having a more serious problem with the AV Fistula. It can get clotted and we can even lose it permanently.
The procedure is expensive. Creating a new fistula can be cheaper. We need to remember though, our bodies have a very limited number of points where a fistula can be created. So, we must preserve our fistula carefully. It is worth incurring this expense even if you are paying out of pocket and get this procedure done as per the doctor's advice.
How often does it need to be done?
Every individual is unique. But studies show that the average number of months between two procedures is seven months.
It seemed to me as overkill at first. An Operating Theatre procedure that costs a bomb every few months just to maintain my fistula? The more I read up about it though, the more I realised that this is the reality. There really is no way out.

Personal Grudge
The hospital I did this procedure at, all three times, classifies this as a 'Major Surgical Procedure'. This means, a few days before the procedure, I need to get a lot of blood tests, an X-Ray Chest, an ECG, a 2D Echo Cardiogram, a consultation with a Cardiologist and a consultation with an Anesthetist. I also need to get a Post Dialysis Serum Potassium tested just before the procedure.
Then, I need to go fasting (not even water after midnight) at 7 AM to the hospital for a procedure that starts at 10 AM. The procedure is completed by 11 AM and I am wheeled into a Surgical ICU for 'recovery'. I have to just wait there for a couple of hours before a doctor comes and takes out the inserted tube (called a sheath). Another hour-long wait after that. I leave the hospital and reach home at 3:30 PM, a full nine hours after I left home.
I am sure every step has a reason (though I simply can't get my head around how this can be classified as a Major Surgical Procedure? It is not a multiple organ transplant; it is only a Venoplasty FFS!). I was more tired by the 'before' and the 'after' than by the 'during'.
Summary
If you're on Hemodialysis and have an AV Fistula as your access, then you should watch out for signs of a stenosis, which is very common. Reach out to your Vascular Surgeon or Nephrologist and see if you need an Angioplasty of the AVF or anything else to keep it going. Your access is your lifeline. Never forget that!
health