Dialysis is an important part of any trip I do that is more than two nights. I have never spent more than two nights without dialysis ever since I have got on to PD in 1999! So, whenever I do long trips like I did to Goa, I need at least one session of dialysis.

I had booked my session about two weeks in advance at Goa's Vrundavan Hospital at Mapusa (pronounced Mhap-sa). I was given the 8:30 p.m. shift. No other shift was available. In one way that was good. I wouldn't need to spend valuable day hours on something as boring as dialysis! I confirmed my session a day before leaving for Goa. Everything seemed to be fine.

On Saturday, the second night of my trip, I booked a cab to take me to the hospital. There was a minor hitch. There are no cabs usually around 12:30 in the night in that area. That was when I would finish my dialysis. How would I get back? I told the hotel receptionist who was booking my onward cab that I would figure out something for the return. Just get me the onward cab, I told her. When I got into the cab, the cab driver asked me why I was going to Vrundavan. I told him about the dialysis. He asked me a few more details and I explained to him. I then asked him about the return. He asked me not to worry. He would figure something out. When we reached the hospital, he told me he would get his friend to be there at 12:30 in the night and drive me back to the hotel. He also asked me to pay for both the onward and the return drive after getting back. This was really nice of him, I thought!

I went to the dialysis unit and introduced myself to Prashant, the technician on duty. I remembered him from my 2008 trip too where I had undergone a session at the same hospital. Vrundavan Hospital's dialysis unit is divided into two parts. The bigger section has about eight machines all for negative patients while the smaller one has two machines for positive patients. Each section has one television set. The unit is slightly cramped. It is like your run-of-the mill dialysis center - purely functional without too much thought to cheer and ambience. Like 99% of units in the country.

The staff was quite amazed that I was cannulating myself. Prashant was not surprised. He had seen this before as well. Soon, I was on dialysis. My neighbor was watching a cricket match. Soon enough, he finished his session and I requested them to switch off the TV and all the lights. After that, I fell asleep. I awoke only a couple of times in between and then eventually when there were about 15 minutes of dialysis left. The best thing I can do on a dialysis session is to sleep! And luckily I could do that this time. 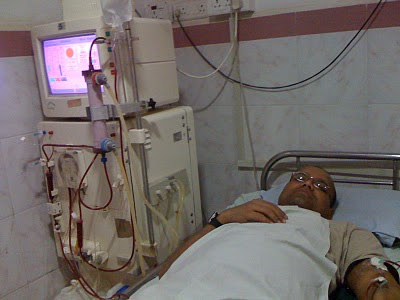 Prashant closed the session and weighed me. I lost about 3 kgs in that session. Good, I thought!

The techs and the nurses are very professional and experienced. They know their work very well and follow procedures very well. There are some differences in the way they do their stuff though. No neosporin is used (in Hyderabad, we make quite a generous use of neosporin). They use the regular sterile hospital kits for starting and closing compared to the readymade on-off kits we use in Hyderabad. Their food trolleys are much higher and are placed at the end of the bed (my leg accidentally hot the trolley once). In Hyderabad, the trolleys are kept at the side mostly. Small differences.

Once I was done, I wished them and then made my way out of the hospital where the cab was waiting for me thankfully! I got back to the hotel - feeling extremely light and airy, drained too. I haven't known that feeling for many years. This was so common when I was on in-center!

I went back to bed and fell asleep. The next morning we were scheduled to do Doodhsagar!
at January 26, 2011