February 20, 2012
So, Aashayein is done! After weeks of hard work of the entire NephroPlus team including yours truly, the event is finally over. It is difficult to imagine that it is over. After occupying your mind's space for so long, when something of this magnitude is completed, it is often difficult to come to terms with it!

The event, as expected was a huge hit.

I reached the venue exactly at 8 a.m., the time we (the NephroPlus team) decided to be there by. As usual, I was the only person there. But to their credit, almost the entire team was there within fifteen minutes or so. Some patients started coming in by 8:15 itself. These people had come in from outside Hyderabad. It was heartening to see people come in from so far for the event. And these people were not paid to attend!

By 9:30, the hall was almost full. We started playing the Aashayein theme and last year's pictures. We started the program around 10:15 and Dr. Brian Pereira, the chief guest of the event, who is one of the world's top nephrologists spoke very well in Hindi though the word 'gurda' - Hindi for kidney - is a horrible sounding word. I wish they chose a different word! Then there was the traditional lighting of the lamp which Dr. Pereira and Rama Kumari, a NephroPlus patient did. The lamp did take some time to light though! 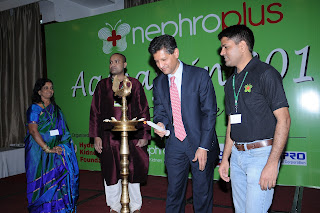 From left, Mrs. Rama Kumari, me, Dr. Pereira and Vikram

After this, Dr. Rajasekhara Chakravarthi, nephrologist from Care Hospitals spoke on a few dos and don'ts for folks on dialysis. One thing that struck me during his talk was how almost all the tips he gave were probably known to every dialysis patient who has been on dialysis for a few years but were totally new for those who have been put recently on dialysis. When you get on dialysis, most of the diet tips totally shock you. A lot of what is good for people with normal kidneys is bad for people on dialysis! Dr. Chakravarthi's talk was great for those who were recently diagnosed.

This was followed by talks by Dr. Rajagopal, Transplant Surgeon and Mrs. Charitha Adikane, Dietician, on transplants and the renal diet respectively.

A sumptuous lunch followed which was prepared according to the dialysis patient's diet. The food was all salt-free and 1 gram salt packets were provided so that patients could add salt to their food as per their allowance. The vegetables were all leached to remove Potassium. I had a hurried lunch because as I served myself and generously mixed the salt from the packets and started digging into the delicious Malai Kofta, I spotted Dr. P. C. Gupta, the brilliant vascular surgeon who was scheduled to judge the Best Fistula Contest and speak on fistula care. I left my plate and dashed off to welcome him. I got back after making him comfortable to find my plate gone. I served myself another plate. This time I settled for plain rice and dal fry. I love this combination!

We started the post lunch session with the Best Fistula Contest and Dr. Gupta declared the winner after which he gave some great tips on how to maintain fistulas for long.

We had some games after this and ended the day with Housie and distribution of goodies.

I was totally tired after the event and reached home to crash. I awoke this morning with aches in my shoulders and legs! I am taking it easy today. There are some other interesting stories from Aashayein and pictures as well which I will post in the coming days.
aashayein health Nephroplus